The most joyful experience I've had so far at the XRIJF was watching and hearing the Omer Avital Quintet Wednesday night at Xerox Auditorium. Part of the reason was that the dancing bassist, Avital, and the other members of his group were clearly having a great time and it was infectious. But it was also because the music they played was simply great.

Avital, who is originally from Israel and now lives in Brooklyn, stirs up a strange brew of styles, including Arabic, Sephardic Jewish, and ancient Andalusian. But he's also obviously heard a few Art Blakey & The Jazz Messengers albums because that great 1950's group sound was very much in the mix. 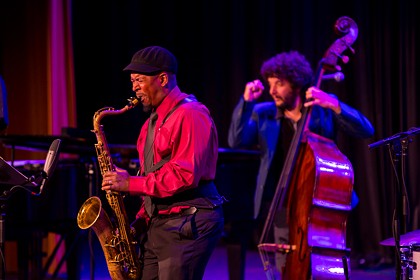 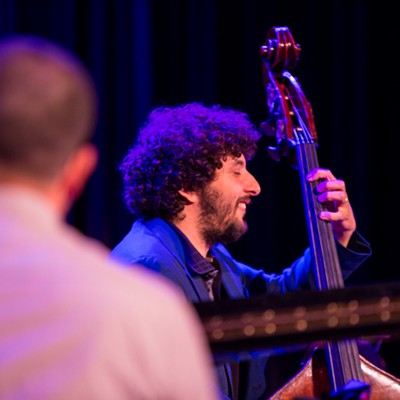 His all-star group boasted a front line of two of the finest saxophonists playing today: Joel Frahm and Greg Tardy. Every solo was inspired and the camaraderie between them was real. Johnathan Blake was having a great time, and doing a great job, on drums. And Yonatan Avishai was excellent at the piano. The group had an admirable spontaneity to it; they changed course a couple of times in the middle of tunes, pulling it off with signals and the skill it takes to do it.

Avital did not put himself out front. But he was a vibrant presence, constantly moving with his bass in the middle of the group. At the beginning of the final tune he played a long bass solo with such variety and dexterity that it was engaging from start to finish.

Xerox Auditorium was the perfect venue for such a big sound. I was up in the balcony and it was flawless.

‪Earlier in the evening I heard Antonio Sanchez & Migration at Kilbourn Hall. The problem was Sanchez is one of the greatest drummers in jazz and he doesn't hold back. Kilbourn Hall, with acoustics designed to hear a pin drop on stage, is not kind to full-tilt drummers.

Aside from that inherent problem, Sanchez and his group were wonderfully ambitious. The players were first rate with John Escreet on piano; Seamus Blake, saxophone; Matt Brewer, bass; and Thana Alexa, vocals. They played Sanchez's latest composition, the hour-long Meridian Suite.

All of them contributed excellent solos, with Alexa and Blake also shining on some voice and sax unison passages. There was one movement with words but most of Alexa's singing involved the voice as an instrument and she did it beautifully.

After hearing Aaron Diehl at Hatch Hall, it was easy to see why Cecile McLorin Salvant chose him to be her pianist. He is a walking (and playing) encyclopedia of the kind of early jazz she loves to perform. He illustrated the evolution of the jazz piano from its early practitioners like Jelly Roll Morton and Willie "The Lion" Smith up to Duke Ellington and the Modern Jazz Quartet's John Lewis, playing each style beautifully.

I'll be getting an early start Thursday because pianist Bill Charlap is playing at the new venue, 440 East Avenue, in a 4 p.m. concert. Then I'll check out Polish saxophonist Maciej Obara and his group, Obara International, at the Lutheran Church. And then I'll find out if Xerox Auditorium is big enough to handle the thunder of bassist Stanley Clark.