I rarely go back for a second show, but Tessa Souter is one of my favorite singers, so why not indulge? Souter has been at the festival four times before at three different venues. She finally made it to Kilbourn Hall.

Souter does not sing a lot of standards; she's more likely to transform a pop tune into one as she did with Lennon and McCartney's "Eleanor Rigby" and U2's "Where the Streets Have No Name." Whether singing her own songs, the songs of friends, or lesser-known tunes she's found, she makes them all personal.

At one point she sang her own "I Will Forget," a song seemingly about an abusive relationship, followed by "You Won't Forget Me." These two strangely mirror-image songs were followed by another relationship song, "You Don't Have To Believe." With its Middle Eastern flavor and gorgeous, sinuous melody it's my favorite of Souter's compositions.

She also drew on jazz history with a beautiful version of Kenny Barron's "Sunshower" with lyrics by Teri Roiger; McCoy Tyner's "Contemplation," retitled "Ancestors," with lyrics by Vicki Burns; and a song with lyrics she wrote for a Wayne Shorter tune.

One of the things that made Souter's sound unique was her band: Adam Platt, piano; Keita Ogawa, percussion; and Dana Leong on cello. While Platt played a pretty conventional role at the piano, Ogawa used hand percussion as much as he used his drum set. And Leong got sounds out of his cello I've never heard before. The result was a unique textural soundscape, far from the usual jazz combo experience.

Platt warmed up as the night went on. His finest solo came toward the end of the second set on "Yesterdays." Ogawa's all-hand (no sticks) solo on the final song, "Pure Imagination" was his best. As for Leong, he stole the show on almost every solo. Aside from playing excellent classical-style cello, he had a way of sliding over the strings without pressing down, transforming the cello into a Theremin.

The most touching part of the show was a heart-felt tribute to trumpeter Lew Soloff, the Eastman School of Music graduate and early member of Blood, Sweat & Tears who worked with Souter and was here with her at last year's XRIJF. Singing a cappella for much of the song, with only Leong backing her on cello in parts, she sang a touching rendition of "Here's To Life." 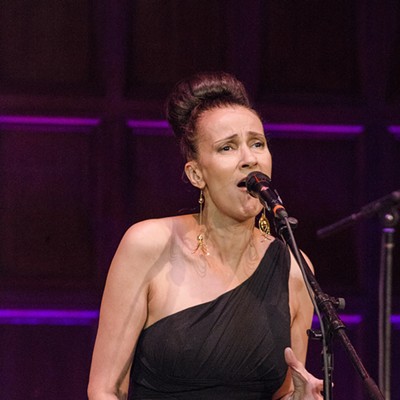 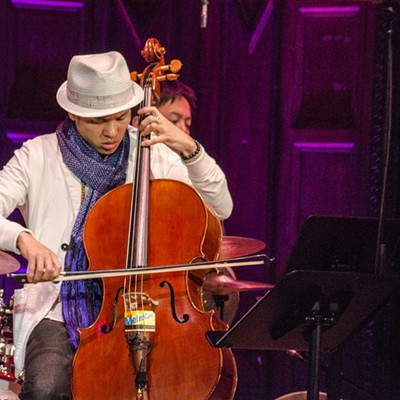 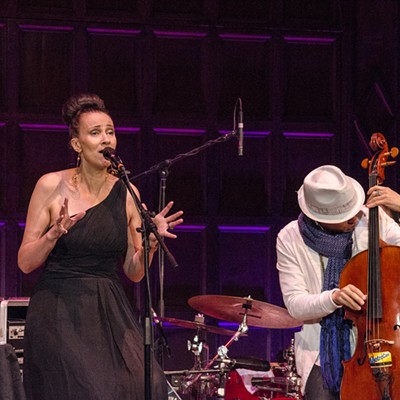 At the Lutheran Church I caught a set by Nils Berg Cinemascope. The group is a Swedish jazz trio but the members performed world music in the truest sense of the word. While videos from YouTube played on a screen above the stage, the trio accompanied the musicians in the videos.

The videos included a singer from Punjab, India; a violin and piano player from a circa-1940's movie; a banjo player from the U.S.; and various street musicians playing everything from a recorder to instruments I'd never seen before. Sometimes the videos were edited for purposes of rhythm, sometimes for more playful reasons.

This crazy form of fusion worked well in every case. The band's message seemed to be that musically, at least, we are one world.

While introducing one of his finest songs, "Invisible Chains," Raul Midon gave away the secret of his phenomenal ability to play bass, rhythm, and lead guitar at the same time (not to mention singing). "I have all day to do this," he told the large crowd at Xerox Auditorium. No one was buying it.

For one song he moved over to the piano, explaining that he was inspired to write at the keyboard by Rickie Lee Jones, who he had toured with. She had told Midon she wrote better stories at the piano. His reasoning was he had to work harder because he didn't know the piano as well as he did guitar and he couldn't fall back on technique.

Midon saved his best tune, "State Of Mind," for last and of course proceeded to blow everyone away with his guitar gymnastics, the added bongo drums, and an extended solo on his mouth trumpet. At one point he mixed the mouth trumpet with guitar riffs and scat singing in a crazy mash-up of notes that truly only he could do.

Joe Locke will be at Kilbourn Hall on Monday night and he's first on my list. Locke never disappoints and, with a great new album and a top-flight band, this concert should be great. EvindOpsvik Overseas will actually be overseas (they're from Norway) when they visit the Lutheran Church and I'll be there. I'll follow that with Trio Red, a power trio from Scotland, England and Norway at Christ Church.