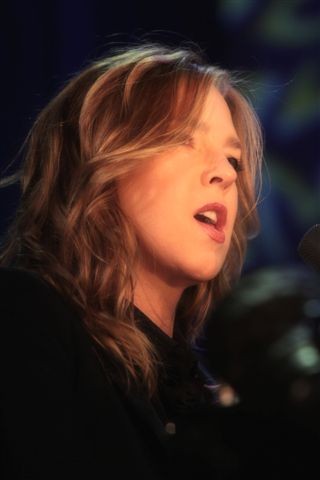 I've debated for years whether Diana Krall's poker face was out of boredom or the fact the chick is pretty damn cool. Krall's 4 p.m. matinee at Kodak Hall? Boredom. She was rather unfocused and bored. Now in her defense, the sold-out crowd was a cadaver convention and it's hard to vibe off a bunch of stiffs. But Krall did not play a theater-level set but rather grabbed the air for tunes as if taking requests at a three-set gin joint engagement. Songs by Joni Mitchell, Bob Dylan, and The Eagles mixed as best they could along with the Fats Waller and Nat King Cole we've come to expect. Don't get me wrong, it was by no means a crumby show. Her band was in the pocket -- especially the guitarist --and her voice still winds me every time; it just struck me as a bit slapdash.

Slipped over to The Rochester Club to dig David Gibson's "Boom." The band hit the stage like a splashdown with an exuberant and flashy display. Jaws dropped with surprise when trombone and trumpet played the same melody and didn't play the same melody at the same time. I know that doesn't make any sense, but I was there and I saw it. The quintet certainly made the music go "boom."

I'm not one to concern myself with a band's fashion too much, really, but the Mavericks looked like a thrift store Easter parade during the band's fantastic set on the East and Chestnut main stage. With outfits that ranged from slick caballero to day-glo rude boy, the band mixed tejano with a little oom-pa-pa push beneath a slick countrypolitan veneer. Singer Raul Malo is right up there with Roy Orbison and Marty Roberts with his achingly beautiful voice full of heartbreak and heart repair. He banged a sweet take on "Blue Bayou" into the cheap seats as well as a handful of Maverick hits. Great show, jack. No boredom here.