The tunes that guitar wizard Bill Frisell selected for his “Guitar in the Space Age” set at Kilbourn Hall were double-dipped in novocain, pumped with helium, and set adrift to cascade and careen about the packed hall. 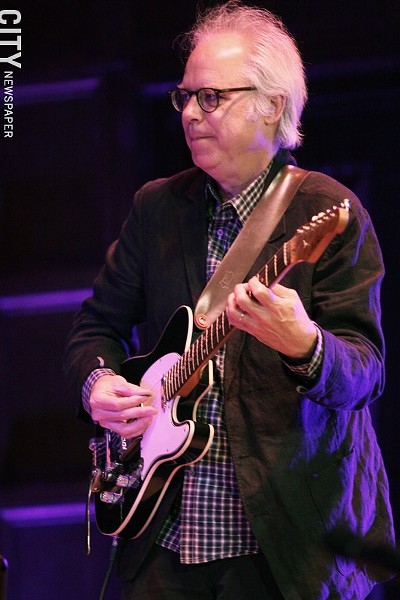 This was Frisell waxing a little more rudimentary than usual. It’s not to say he is ordinarily tuneless. It's just that he has a heightened sense of melody. Not one to dumb it down, Frisell keeps it trippy and abstract -- except tonight where he adhered to melodies that the average Joe could more easily pluck out of the air.

Tunes by the Kinks, the Beach Boys, the Ventures, Steely Dan, and Lynyrd Skynyrd got the Frisell treatment, which this time meant playing closer to the tune as opposed to taking the six-string expressway to the moon. What didn’t change were the dreamy soundscapes and the master’s curious and picturesque refrain. It was over entirely too soon. What a gas.

And what a mob, what a crowd, what a scene, what a show at Abilene. You see, you take the front man from Nashvegas’ damnation tent-revival rockers the Legendary Shack Shakers, one Colonel JD Wilkes and cross him in wedded and onstage bliss to a Fairport girl, one Jessica Wilkes, and man you’ve got the Dirt Daubers and the one show I’ve truly been waiting for this week.

Wilkes does the majority of the singing when he’s not blowing some hellacious harp through a Green Bullet. He’s an antagonist and a contortionist and knows how to fire a crowd up. So does the missus, as she commandeered the doghouse bass in a tight black dress and heels, only to swap out with her hubby so she could belt the blues and break hearts while he minded the bottom end. They blew the doors off the joint.

The Dirt Daubers have gotten much more ragged and raw, with a sinister slither and twang. They had the crowd in a howling frenzy, inviting a cat on stilts to join them on stage, and a dance floor that looked crammed full of incurables. It all really add to the Pentecostal revival feel in the tent. I think a few were saved. I’m afraid it’s too late if you missed it. I’ll light a candle for you.