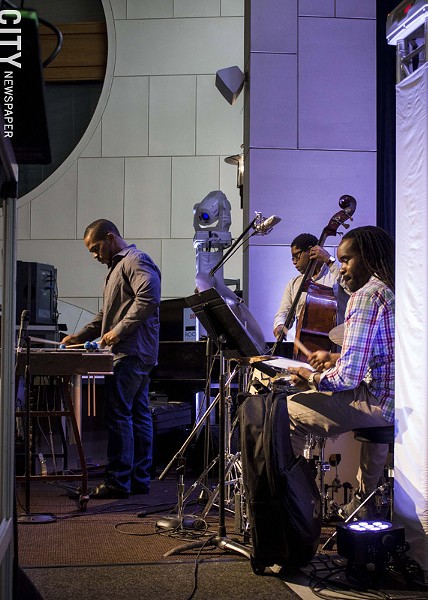 Watching the blur of mallets in the hands of Warren Wolf at Max, I realized that great vibraphonists are a special breed. They are striking bars that are something like a double piano keyboard, but they’re doing it from a distance with sticks that have little balls on the end. They’ve got to be as fast as a great drummer, but they’ve also got to hit the right targets.

Wolf hit his targets at lightning speed on uptempo tunes and made the bars sing on ballads. He wasn’t flashy; he only used four mallets when he was backing a bass solo, but he sure knew his way around that instrument.


Curiously, Wolf would occasionally move over to an electric piano. But the piano's setting seemed to be the one that simulates vibes.

Next I caught Brian Kellock & Tommy Smith at Hatch Hall. Kellock is one of the United Kingdom’s top jazz pianists and Smith is a top saxophonist. Their set was full of pyrotechnics on both instruments.

Kellock played spectacularly, in a manner reminiscent of Art Tatum. But he also knew Thelonious Monk, and his technique included elbow clomps on clusters of notes. Smith had the full tenor vocabulary in his arsenal, from guttural grunts to high-pitched melodies and everything in between. They played mostly American standards.

The highpoint of the concert came when, in a manner of speaking, Smith played the piano. At the start of “Moonlight In Vermont” he aimed the bell of his saxophone under the lid of the Steinway and unleashed a series of beautiful echoes. 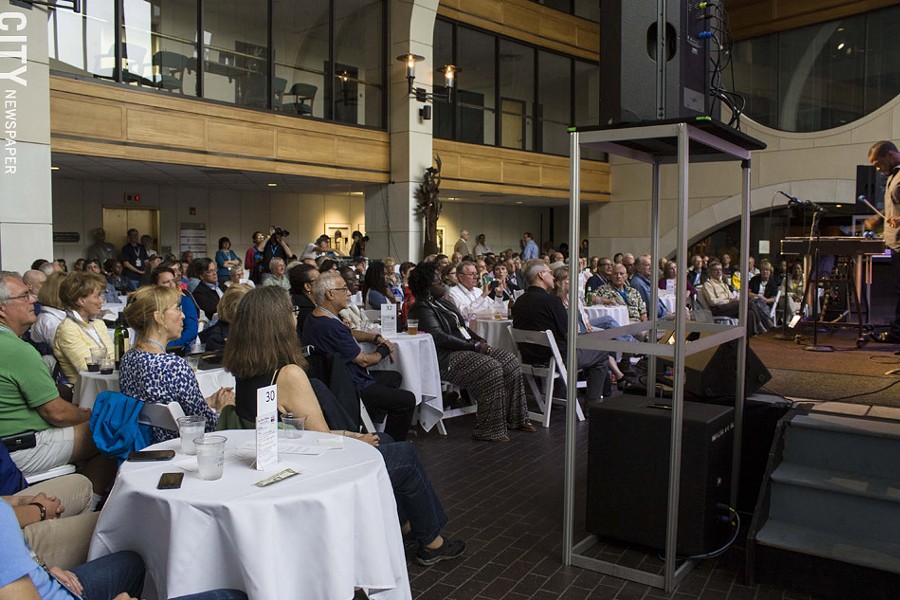 The Jonathan Gee Trio was already into its set at Christ Church when I arrived. Gee, his bassist, and his drummer are all excellent musicians, but they rarely engaged the crowd and there was a constant stream of audience members leaving the church.

At one point in the middle of the set Gee sang two standards, “The Very Thought Of You” and “A Nightingale Sang In Berkeley Square.” His voice was reminiscent of Michael Feinstein, but his head was turned away from the audience.

Because it’s the home of the Nordic series, I expect to hear something different when I enter the Lutheran Church. But Wednesday night was differently different. Instead of an avant-garde jazz group, David’s Angels occupied the stage. In the back, on bass, was David, looking like he had just stepped out of the 1960’s. In front were the angels: to the right and left an excellent drummer and keyboard player, and in the middle, a singer.

A striking figure in a floor-length black gown and a red hair-net attachment in her blond hair, she sang in an ethereal voice and used expressive arm gestures, at times recalling Kate Bush. Once in a while she tapped a petal to electronically enhance her already gorgeous vocals. The songs were in English, but with an ancient Swedish sensibility. What a refreshingly odd pick for the festival.

As for Thursday night, Manuel Valera is one of my favorite pianists; I’ll be at Hatch Hall early for his solo show. Then I’ll catch Anders Hagberg at the Lutheran Church and Ian Shaw at Christ Church.