At Kilbourn Hall on Saturday night, the Jason Marsalis Vibes Quartet provided a stark counterpoint to many XRIJF bands. Instead of the loose-fitting clothes favored by physically active musicians, all four of them wore suits and ties. This buttoned-down look would seem to contradict the freedom inherent in jazz, but even that freedom was under control. There were no 20-minute rambling tunes here; each composition lasted about five minutes. Marsalis kept glancing at his watch (at least eight times). A one-hour set was going to last one hour.

If all of the above sounds negative, it's not. I just found it to be a fascinatingly different approach from a unique jazz personality. In fact, Marsalis and his band were great. It was refreshing to have each tune be a distinctive entity rather than a meandering jam. There were beautiful ballads ("Nights In Brooklyn") and sneaky sounding melodies ("B.P. Shakedown") and even a tone poem of sorts about a man who could not dance.

Solos were short, but excellent, with an occasional quote from a Monk tune or another classic. These well-groomed men let loose in their music in a manner reminiscent of a dressed-up 1950's band. Marsalis' polite demeanor did not prevent him from some astute political remarks that drew applause from the crowd. The show ended at exactly 7:02 with a standing ovation but no encore. 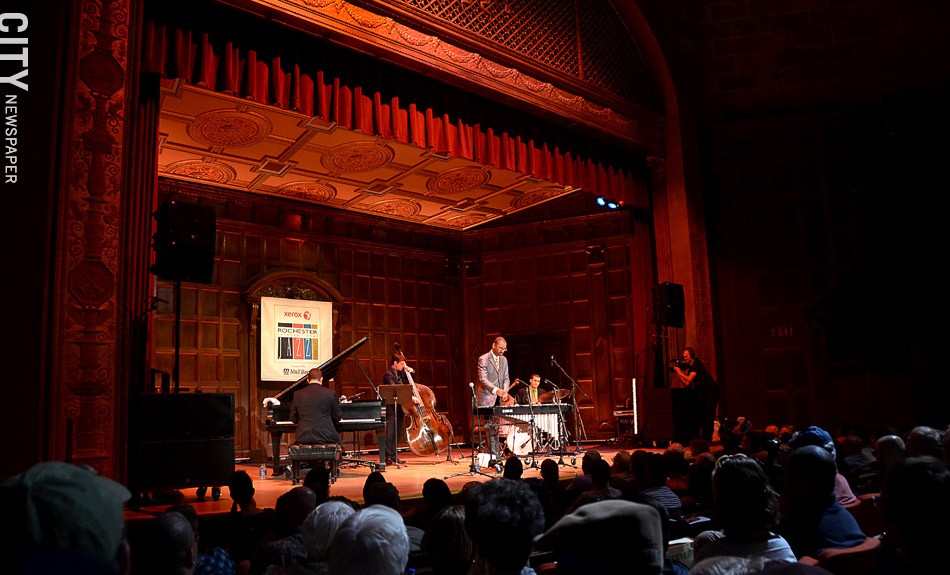 Over at the Lutheran Church, the Sunna Gunnlaugs Trio proved to be a little too milquetoast for my taste. Gunnlaugs is a fine pianist, but her set seem pre-programmed, with the band taking few, if any, risks. Still, she is a beautifully melodic player with a style that worked well on the group's cover of Tom Waits' "Johnsburg, Illinois." Gunnlaugs saved the best for last, with the entire group coming alive on a song titled "Gallop."

The John Escreet/Tyshawn Sorey Duo, over at Christ Church, made me suddenly desirous of a little milquetoast. I'm not sure if they were relentlessly experimental from start to finish, but they certainly were from the start until I was finished with them 25 minutes later.

Escreet banged at the piano while Sorey banged at the drums. Sometimes Escreet's hands went inside the piano to make meaningless noises there. Sometimes Sorey threw drumsticks in the direction of the audience. At no time while I was there did they approach playing anything I would call music.

Sunday night, I can't wait to see Cécile McLorinSalvant, one of the most heralded new singers on the jazz scene today, at Kilbourn Hall. Then I'll catch the young pianist Gerald Clayton at Hatch Hall and bassist Euan Burton's group at Christ Church.