Ah. The last night of the jazz fest. That went by quick, didn't it? First up tonight was Marianne Trudel, tinkling the ivories in the beautifully intimate Hatch Hall. I stuck around for her first song (coming in at a lengthy 15 minutes), and her soft stylistic playing was perfect for the pin-drop-quiet acoustics of the hall, but it was conceptually lofty and more than I could sit still and grasp at the time. Her tune (an original) also made me realize that unlike other shows, for a solo jazz show like her's, it is quite hard for a reviewer to tell where the line between improv and a piece's regular ebb and flow is, as well as how close a player's work is reflecting the original idea. There were a few odd note choices; but I can't say if they were purposeful, or not. I guess that's jazz for you.

Next up, and closing off the festival, was Jazz Fest veteran Trombone Shorty on the super jam-packed East and Alexander Street Stage. He's almost become a staple of the festival at this point, and there's good reason why. He's more of a brass rock explosion than what might come to mind when you think of a more traditional jazz ensemble, and he is one simply put, one hell of a trombone player. 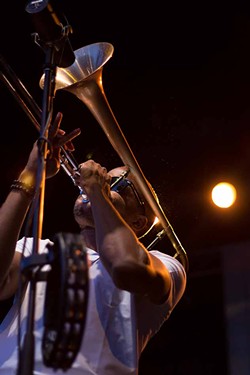 Trombone Shorty is damn good at what he does - and strongly consistent - but I just wasn't as blown away this time as when I first saw him. He is a perfect festival musician: loud, vibrant, powerful, charismatic, and full of swagger, and he always brings in those much needed non-hardcore jazz crowds to the street stages. He's just become a safe and expected part of the festival at this point. But, he does give hope for trombone players everywhere that one day they can leave the back of the band and be rock stars some day, and that's something.

Not to end on a sour note, but one last side note on the festival as a whole: To all the rude patrons who camped out in folding chairs taking up almost the first entire block of the East/Alexander stage where Trombone Shorty was playing; please don't. I don't care if your feet hurt or it's uncomfortable or hot or whatever. It's a music festival: it isn't supposed to be comfortable. These are standing events. Everyone is there for the music and deserves the same chance to experience it that you do, and it continues to boggle my mind that the jazz fest (unlike most other concerts/festivals/etc.) continues to allow chairs. A few people should not be able to commandeer nearly the entire viewing area of a show to the detriment of the rest of the crowd behind them. It's really quite inconsiderate.