His hair may be grey, but his eyes still sparkle that Frampton blue and his voice still croons his ballad, “Baby, I Love Your Way.” Frampton’s Guitar Circus was the headliner show tonight at the Eastman Theatre, and for two hours Peter Frampton delivered a non-stop powerhouse show that brought the audience to its feet on multiple occasions. The night started with a set by Robert Cray, and Frampton’s show included several numbers with Don Felder, former lead guitar player of The Eagles.

The stage at Eastman was fully open to the back wall, where a huge screen had been installed to run everything from photographs of a young Frampton to psychedelic digital art. The stage was packed with electronics -- the row of stomp boxes at Frampton’s stage right microphone easily spanned five feet. Frampton and his two accompanying guitarists changed instruments multiple times, and a man in the wings was in charge of several dedicated guitar closets from which he was extracting instruments and continually checking before handing them off.

The guitar hand-off was basically the only time Frampton stood still during the two-hour concert. Frampton remains every bit as wirey, as frenetic, as pump-that-body-down-as-you-pulse-to-the-beat-of-the-drums. It’s clear that he loves what he is doing and he sends that joy out to the audience with every note. Hailing from Bromley, England, and performing since the mid-1960’s, it was his fifth solo album that sold more than 6 million copies and catapulted him into the status of a legend of rock.

The show was 12 songs plus two encores. Frampton’s performance of “I’ll Give You Money” was grounded to a relentless drumbeat that swirled the guitars higher and faster to the end. By the time Frampton got to “Do You Feel Like We Do?” the audience was in such a frenzy that Frampton seemed to be having a good time wandering around the ending for several minutes before bringing it to a big bang of a close.

Felder joined Frampton for two songs and then the encores. It was The Eagles’ “Hotel California” that had the audience loudly singing along. But, for me, the night was made in their rendition of my favorite Stevie Ray Vaughan song, “Pride and Joy.”

Performing with Frampton were Adam Lester on guitar, Stanley Sheldon on bass, Rob Arthur on keyboard, and Dan Wojciechowski on drums. Every member of the band added superb skill, particularly in their abilities to follow Frampton’s spontaneous extensions of instrumental sections, engage in full-frontal duels, and respond to invitations to ping-pong the rifts. Lester, in particular, was something of a surprise. Don’t let his British pub-boy appearance fool you -- his technique and musicality are fantastic.

But here I’ve skipped to the main performance without telling you about Mr. Robert Cray. I’m going to have to call him that because I was bowled over by his towering strength. Every word he sang told a story with a lesson, from confessionals about being the lover and hearing the wife get taken to task by the husband “through thin walls” to another song with that dark touch of humor that one needs to be the main course, not the side dish. There’s a simmering anger with purpose that rises to the surface of Cray when he sings, and you just know that he’s telling not just his truth, but The Truth, and you had better listen up.

So that’s a wrap for me on Jazz Fest 2013. There is no doubt in my mind that the transition back to classical is going to be tricky. If you see me swaying a little in my seat or pencil drumming in 12/8, you’ll know I’ve reverted to the land of Cray. If I’m dipping my chin to let my hair slide over my face while fingering an air piano, I’ve slipped back into memories of the insanely great jazz pianist Michael Wollny. I’ll simply have to do my best not to air guitar Frampton or it will surely be time for the ushers. 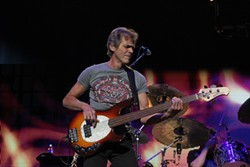