Authentic music. It’s what jazz is. It’s this connection these musicians make when they are so good at their craft that they are released from reality and invite us to come along. It’s what happens when you listen to jazz musicians like Bob James, David Sanborn, Steve Gadd, and Carmen Souza. It was a truly enjoyable night of jazz.

I saw Carmen Souza during her first show at Max of Eastman Place. She wore a white jumper and tights, a red flower in her hair, and a parrot painted on her guitar. From the first, there was a certain groove to her performance. Souza’s vocal range ran as high and as low as a glissando, and she was quite frequently note-jumping from one end of that range to the other. She is a vocal seductress, luring you in to a syllable on a note only to slide it into a warble and severely elongate the ending consonant before sharply snapping it off.

As Souza’s set progressed, she wandered from one song into the next, in a seemingly random fashion. But, at each turn, there was a beat connecting the songs, like a river flowing through different, strong landscapes. By the end, Souza’s voice and body gyrations transformed into something almost primal, and she left many in the audience dancing in their seats and in the lines against the walls along which they stood.

Then, it was over to hear Bob James and David Sanborn in a sold-out show at Kodak Hall at Eastman Theater. James, a pianist and composer, took to the stage, every bit a hipster, sporting a pin-stripped suit, a pin-stripped button down, and red glasses, complete with every score in a touch pad that he proceeded to operate flawlessly. James is performing with saxophonist Sanborn again, some 20 years after their album “Double Vision.” James and Sanborn performed works tonight both from that original album and also from their new CD, “Quartette Humaine.”

James and Sanborn could not have approached the music from two more different points.Indeed, Sanborn had his score pages taped together and strung across two music stands.But, from that first downbeat, James and Sanborn were as one as they played through nearly two hours of music such as “Geste Human,” “Sofia,” “Maputo,” and the show-stopping “Follow Me.” James warned the audience that they weren’t going to be able to count in jazz 4/4 for the last piece, and he was right. The piece seemed to release each musician from the force of gravity, pulling us higher and higher and louder and louder with them, until it was too soon done. 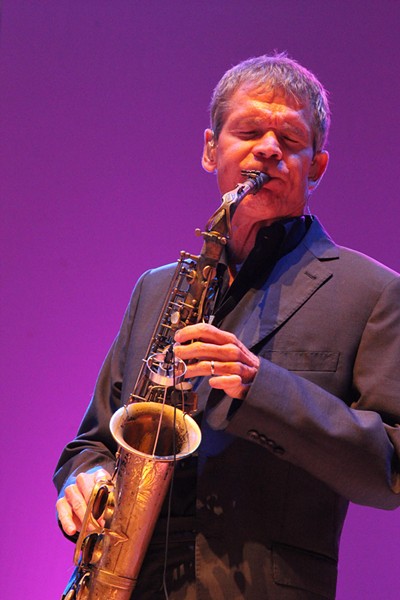 The house came down and James and Sanborn came out for encores, the last of which, “You Don’t Know Me,” gave an entire segment of the audience what they had been waiting for: Steve Gadd on the drums. A Rochester native and something of a hometown hero, Gadd did not disappoint. His raw energy and command of the beat whipped the audience into an absolute frenzy before they sent us back out into the night.

Tomorrow is Friday and that is my last assigned day for this year’s Jazz Fest. I’m currently scheduled for Giacomo Gates (Rochester Club), Frampton’s Guitar Circus (Eastman), and if I can scoot along East extra quick, Ben Taylor (Little). Hope to see you there!