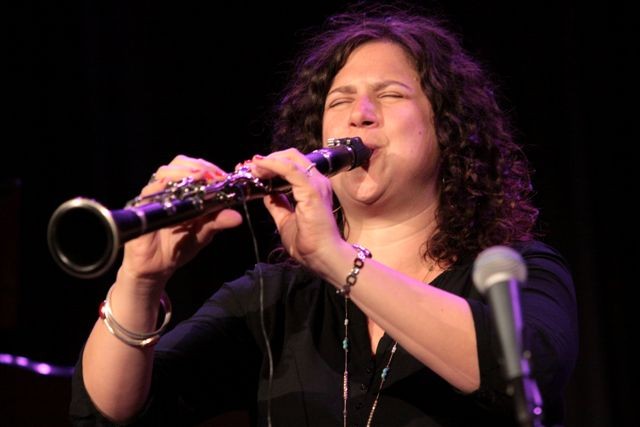 Xerox Auditorium is not exactly the ideal venue for a jazz concert. It is, after all, a sterile corporate auditorium. But Tuesday night Anat Cohen breathed new life into it by breathing a dizzying array of wonderful notes into her clarinet and saxophones. She and her band were a joy to watch and hear.

The auditorium had its first-ever full house and Cohen gave the crowd what it came for. She danced, and laughed, and played snake charmer to her drummer, Ulysses Owens. Her enthusiasm was infectious but it would have been nothing without her incredible musicianship.

Starting with Fats Waller’s great “Jitterbug Waltz,” she slinked her way in and around the melody on clarinet. And she was equally adept at tenor sax on “The Wedding,” another great tune by Abdullah Ibrahim, and on soprano sax on a Brazilian song.

Her band was on fire throughout the set. Owens and bassist Joe Martin were excellent and pianist Jason Linder was Cohen’s equal in creativity when it came to solos. At one point he seemed to turn his piano into an electric keyboard by sliding his iPhone over the strings inside as he was playing them. It was the best use of an electronic device I’ve seen at a concert in a long time.

Earlier in the evening I caught the John Patitucci Trio at Kilbourn Hall. Patitucci, a bassist, brought the superb saxophonist John Ellis and a fine drummer whose name I didn’t catch. During the first tune I felt like the group needed a piano or guitar and should have been a quartet. Patitucci seemed to anticipate this, referencing the most prominent leader of a piano-less jazz group (Sonny Rollins) later in the set.

But I forgot my complaint as soon as he picked up his electric bass. It’s a six-string bass that kind of combines guitar territory on the high end with a traditional electric bass. Patitucci was all over that thing, slapping, picking, and strumming magnificently. My favorite tune was “Mali,” composed as a tribute to an African musician he had played with.

I heard another great tenor saxophonist, Julian Arguelles, over at Christ Church. Arguelles’ quartet, from England, boasted pianist Kit Downes. Both he and the leader turned out nicely shaped solos every time. But what I liked best about Arguelles were his compositions, which were always distinctive and never predictable.

After knocking his use of electronic vocal gimmicks in Monday night’s blog, I wanted to hear Alfredo Rodriguez play solo at Hatch Hall. What a difference a day makes; he was wonderful. He played Cuban songs and original compositions, but he played them in a style recalling Keith Jarrett.

The audience was transfixed as he combined super-human technique with exquisite sensitivity. Every tune he played was a journey, and although he had played them before, there was a sense that he was rediscovering them, exploring from different angles. For instance, when he played possibly the best-known Cuban song of all, “Guantanamera,” it was more like pianistic Paganini Variations on “Guantanamera” showcasing myriad possibilities.