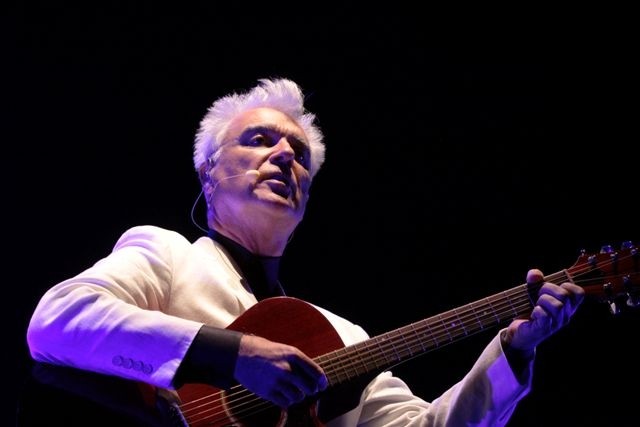 Writing is a process I cherish, and I thoroughly enjoy the challenges that it brings. But I've tried to write this review three times and I still have no clue where to start. Philosophically? Historically? Metaphorically? Blow-by-blow account?

I've done a lot of letting go as of late, yet find myself still holding on to the music I love in lieu of adventures outside its walls. So it's swell when someone can take what I love and supplement it with what I've never heard, all without losing me. David Byrne and St. Vincent blew my doors off Tuesday night at Kodak Hall by taking elements of what I love and somehow hammering them into something I can only think to call breathtaking. That is, unless I opt to go back and start Version 4.0 of this ramble.

You see, I knew what to expect. Yes, I did. David Byrne's cockeyed, theatrical slant augmented by a woman who appeared to be part performance artist, part musician. It was a toss-up between minimalism and maximalism. I knew something was up when I first saw the stage littered with the 12-piece band's instruments, strewn haphazardly about on the floor. What followed was mindblowing; part parade, part interpretive dance, part robotic, part vintage Hollywood, with an entirely epic wall of sound thanks to the brass-tastic arsenal of horns. 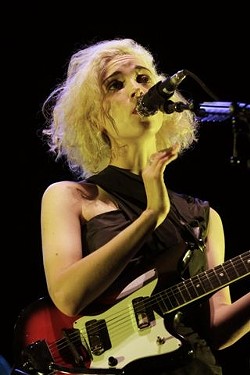 St. Vincent is the stage name of Annie Clark, a Manhattan musician that has Byrne's affinity for quirk but is a little less off-putting with her striking beauty. She tippy-toed about the stage like a bottle-blonde geisha wind-up doll in heels. She sang with a beautiful innocence that harmonized both musically and visually with Byrne and his star power. And her guitar was ragged and entirely out there with beautiful sonic bursts of dissonance, like a cross between Diana Dors and Adrian Belew, or like a Blues Explosion cabaret.

With the exception of its esteemed leaders, the band was almost exclusively brass, and performed with an odd choreography that looked like Tai Chi, or pawns on a life-sized chessboard.

The band didn't rely on Talking Heads material, but let fly with a few gems to placate the rabid crowd, like "Burning Down the House" and "This Must Be The Place." Two encores later, the crowd still screamed for more. This was utterly fantastic music. I'm not sure I've done it justice here. Perhaps I should start again...

It was a dark and stormy night...