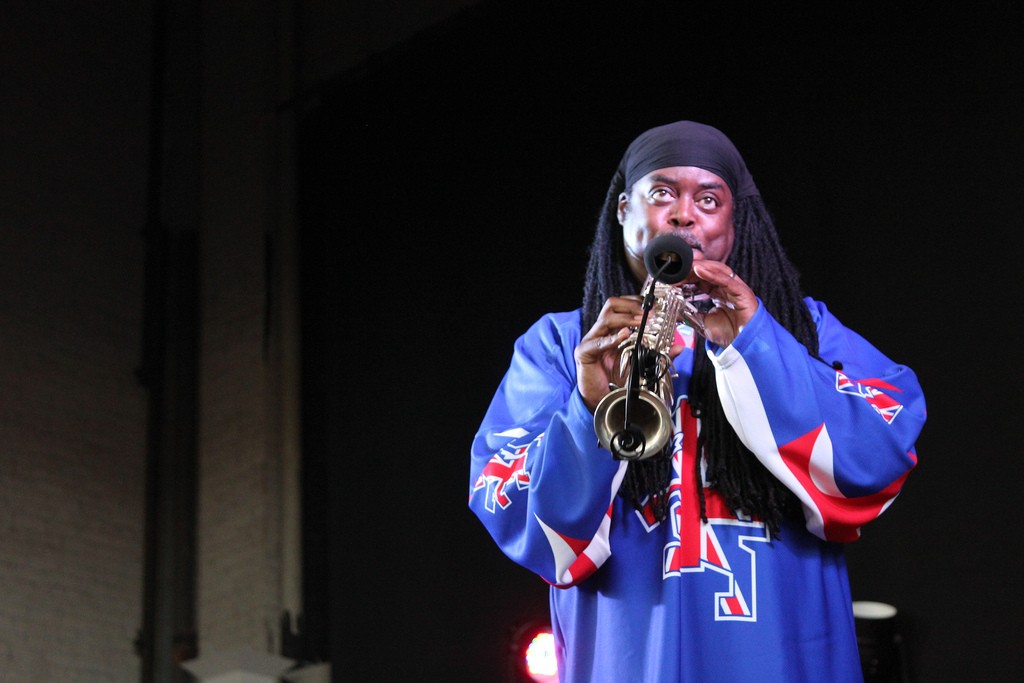 UPDATED 6/25/13 with the name of John Sneider, the guest trumpet player who performed with the Eastman Youth Jazz Orchestra.

Monday was Day 4 of the 2013 Xerox Rochester International Jazz Festival, but for me it was the first night out.I’m contributing coverage to City this Monday through Friday.

I arrived early and got to take in the sounds of the West Irondequoit High School Jazz Band on the Jazz Street Stage (more commonly referred to as “Gibbs Street”). No fewer than 21 high-school bands were scheduled to perform in this year’s festival, and I’m giving a shout out to the West Irondequoit student playing alto sax for his natural rhythm and strong line.

The first show I was assigned to cover was also the best of the night, a UK jazz artist with Jamaican parents, Courtney Pine. He took to the stage at Harro East in an official Great Britain team shirt and let loose with a wail on his straight soprano saxophone. Pine is not traditional, or even American jazz. There was an obvious Caribbean influence that included steel drums. By the third song Pine’s entire group was grooving and dancing upon the stage, and I couldn’t fathom how the audience remained in its seats.

What a switch to then head over to Max of Eastman Place, which was full to capacity for the early show by Hiroya Tsukamoto and Satoshi Takeishi. Tsukamoto played an acoustic guitar (amplified) and sang. Takeishi delivered percussion, from a drum with a tambourine fixed inside, a large handful of wind chimes that he stroked against the drum, brushes that he used on the snare drum, small bells and cymbals, and a round drum with perhaps dry rice inside. Tsukamoto’s songs, like “Gemni Bridge,” were sublime, with the voice sounding as if off in a distant memory, adding an arc to the instrument and percussion.

Special congratulations also to the two winners of the scholarships, Ryder Eaton (School of the Arts) and C.J. Ziarniak (Aquinas Institute). Both Eaton (bass) and Ziarniak (saxophone) will matriculate at ESM this coming fall to pursue their studies.

And with that, I’m checking my schedule for tomorrow, a line-up that includes John Nyerges (Rochester Club), Djabe (Big Tent), and Michael Wollny (Max of Eastman).For this year’s festival, I’m looking for jazz blended with other cultures to create unique sounds.