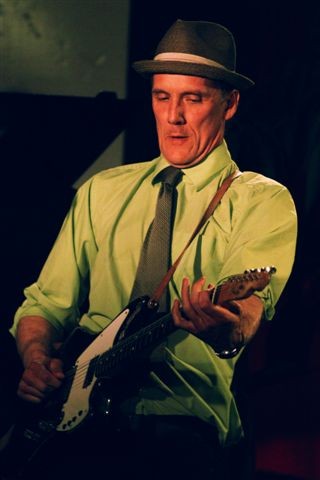 Of all the bands that I wanted to see on Sunday night, and of those I hadn’t seen before, The Stretch Orchestra at Montage Music Hall was at the top of my list. I've seen this Canuck trio in parts — as solo artists or sidemen — and knew the total would surely outweigh the sum. Well, these cats took the stage, took a bottle of quirk and mixed it with some carbonation, shook it, and popped the cork.

Leading the charge was multi-instrumentalist Kevin Breit (Norah Jones, Sisters Euclid, etc). If it’s got strings, barring yo-yos, he can play it. Breit’s attack was just that; an attack, visceral and intense and yet he could coax utter beauty (I forgot to mention heartstrings) from a baritone guitar as quickly as he could pummel the low end and send the upper register up, up, and beyond. There were periods of confusion, chaos, and elation for all in attendance.

Matt Brubeck added the bottom end, working his cello as a bass with an equal affinity for soaring forays into madness, and an added bowed beauty. Drummer Jesse Stewart was solid and on the same page as his band mates, but didn’t come off as left of field as the other two. Perhaps I’ve grown to expect drummers to be rather crazy. It’s a bit premature, I know, I know, but this was one of the best shows of the whole Festival.

Christine Tobin sang her poetic interpretations from the altar at Christ Church with a gentle lilt that was entirely too precious for the mood The Stretch Orchestra had put me in, so I skedaddled. Besides it was in a church and God and I have an understanding; he stays out of my house and I stay out of his.

I usually don’t truck on the negative side of the street, but the Louis Armstrong Jazz Society Band left me wanting Satchmo. Don’t get me wrong — or do if you want, I dare you — this band was top notch; heavy hitters playing jazz from the very top of the pyramid as Jack Garner so aptly put it in his introduction. But the band’s singer, who made a splashy entrance from the rear of Kilbourn Hall, made me feel as if I was in Vegas or on a cruise ship. So I set sail for Abilene with The Stretch Orchestra still rattling around my skull. Goodnight Miss Calabash, wherever you are…