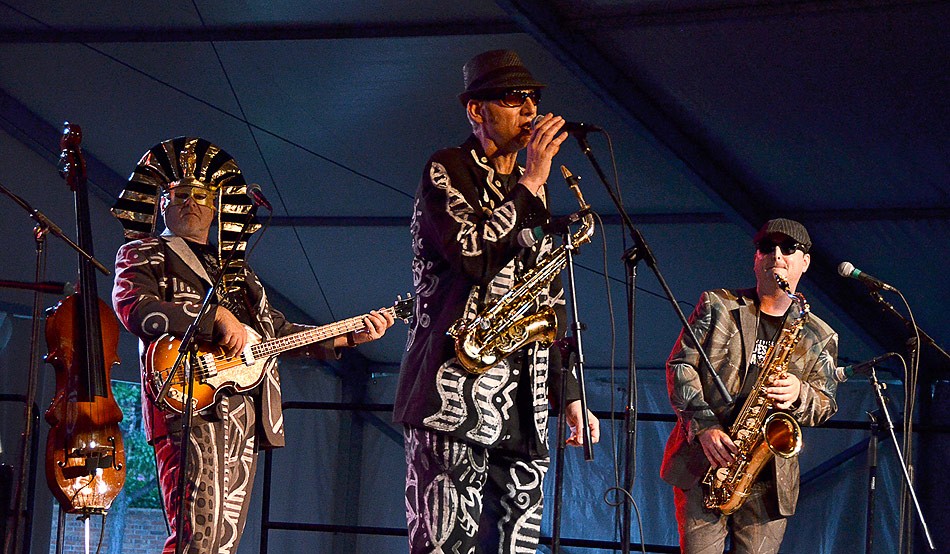 First up for me Saturday at the 2013 Jazz Fest was the Halie Loren Trio at the Rochester Club. It's an interesting venue (food and jazz at the same time!), and Loren's trio fit the space well. The act created music that was more fit for the background of a conversation than it was being at the forefront. Loren’s voice was soft, just shy of sultry, as she and the trio created what was essentially ambient music for the room. It was nothing too exciting, or too powerful.

Also worth nothing was the fact that her trio -- keys, vocals, and bass -- lacked anything strongly percussive, and you could tell as various members took turns clapping or hitting their instruments to try to keep some kind of rhythmic backbone going. Not the strongest start to the night.

Next up was YolanDa Brown at Christ Church as part of the Made in the UK Series. I only got to catch one song before I had to bounce to the next show (it didn't help that she burnt stage time making the audience members introduce themselves to the people sitting on the right and left of them), but the opener was lyrical in that way that saxophone playing should be: the instrument acted like a human voice, expressively talking to the audience. I'm still trying to figure out why she had an iPad on stage, but that mystery will have to go unsolved for another day.

In certain musical circles, there's a stigma against the acoustic guitar. For some reason it can appear that if a player is skilled enough he or she will eventually “graduate up” and learn to shred on the acoustic's electrical brother. That's a bias that Loren and Mark easily dismissed Saturday at the Little Theatre.

The duo was the runaway winner of the acts I saw Saturday night, and was more a one-bodied, guitar-playing monstrosity with four arms than it was two people up on the stage. The duo was cool and collected, making the onslaught of acoustic-y goodness look and sound so easy.

Moving from Western melodies to some gypsy jazz a la Stephane Wrembel's silly Paris song, the duo played in beautiful unison, perfectly passing note runs between one another to the point where it was sometimes hard to tell where one's playing stopped and the other’s began. Simply great stuff. Who needs electric guitars, anyway?

Last up I shuffled (it's almost like I planned that) off to catch Shuffle Demons under the Unity Health System Big Tent. When I got there I was surprised to find that the crowd was sparse. The Demons came out dressed to impress, but failed to flatter. The band’s cover opener was a disjointed arrangement, and its original songs showed some promise as a tight horn-driven unit before being ruined by subpar vocals and simple, needless lyrics. It was almost like the group couldn't decide what it wanted to be, and opted for an all-over-the-board approach that wasn't doing any of it justice.

Even the awesomely dressed pharaoh string-bass player couldn't save the show. Shuffle Demons will be back Sunday night on the Jazz Street Stage, but your time is probably better spent shuffling off to see someone else. Nothing demonic here, folks.

Sunday I plan to check out Mike Brignola at the Rochester Club and BeauSoleil at Harro East. What will you be seeing?