The sky was cryin’ as me and my baby (now married six years) made our way to the festival site Saturday. First up: Dr. Lonnie Smith at Kilbourn Hall. Smith and his band --- guitar and drums --- came out to initially build a groove from next to nothing. It was if they were making musical spaghetti and seeing what would stick to the wall. The experiment built and built until it turned into a frothy broil with Smith’s random stabs and swirls of the B-3 organ knockin’ on the door marked “serious.” And just look up the phrase “impish grin” and you’ll see Smith’s smile looking back at you.

The band was loud for the room. That was fine, except for when the drums occasionally threatened to wash out the colors and underlying tones Smith was laying down. Don’t get me wrong; the cat knew how to thump the tubs. Maybe it was just how the room handled it.

Willie Nelson strolled out on to the Kodak Hall stage and didn’t stroll off until every motherf***er who has said to me, “Willie Nelson isn’t jazz,” walked away convinced that he is. First off, this was just an amazing show front to back, with Willie and his minimal band --- bass, snare drum, harmonica, piano --- digging into his hits, other people’s hits, and some new, soon-to-be hits like “You Don’t Think I’m Funny Anymore” or “Roll Me Up And Smoke Me When I Die.”

But back to the jazz analogy. Like Ray Charles, Nelson sets his own time signatures that flow pretty much as he feels them, when he feels them. According to his bassist, my old pal Kevin Smith, it’s a heads-up game playing with Willie as he lyrically and melodically interprets the songs as the mood hits him. There probably is no other artist that has sung more versions of his own songs than Nelson. And his guitar playing? It is elegant, poignant, blissful, heartfelt -- a quiver of six-string arrows through the heart. Let’s see: it’s interpretive, innovative, evolving, and exquisite. Yup. That’s jazz. Told ya.

Willie kept me a little late, so I popped over to hear Delbert McClinton wail the soulful blues over an absolutely blistering band playing full throttle on the Chestnut Street stage. Man alive, those were some great horns. But I had to split in order to see John Mooney and Bluesiana turn the Abilene tent into a sweaty, dirty, raunchy juke joint circa 19-remember-when.

Mooney stomped and wailed some vicious blues mostly on his shiny dobro. Built around intoxicating riffs, Mooney’s blues did nothing to soothe the savage beast. It antagonized and taunted the poor bastard. The whole place was sexed up and getting down. I bet everyone leaving the place got laid that night, even if it wasn’t their anniversary. Say goodnight, Gracie.

Sunday night I’ll be lining up to see Christine Tobin, the Louis Armstrong Jazz Society Band, and Stretch Orchestra, which I’ve heard great things about. What will you be seeing? 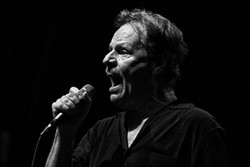