With the longest line I’ve ever scene snaking out of the Harro East Ballroom --- down around the block and all the way up Liberty Pole Way --- the 2013 Rochester International Jazz Festival kicked off in style Friday night. It was gorgeous outside as I made my way into the early show of the sold-out ballroom. Quincy Jones protégé Nikki Yanofsky was the draw, and boy was she amazing. She hit on standards like “Witchcraft,” underground standards like Louis Jordan’s “Let the Good Times Roll,” and even broke into some slick scat a la Ella Fitzgerald. Correct me if I’m wrong, but I think she threw in a “Yabba DabbaDo.”

Yanofsky’s voice was absolutely beautiful as she and her band put a contemporary twist on jazz. Musically she did that with the pop medley of contemporary-radio hits that frankly I could have done without, and that no one in the audience recognized, based on the amount of khaki in the seats. Still, she was a two-fisted knockout punch of style and beauty. And though in some circles she’s referred to as “Quincy Jones Presents,” she was a lot less contrived than I thought she would be. Simply put, the young lady was remarkable.

The stage for Eastman Theatre headliners Pink Martini was set so that you could see all the working parts. And it was fewer parts than the group often has when it plugs into an existing orchestra. The band laid down its beautiful, multi-lingual, multi-genre exotica with Hollywood grandeur and style. It was Round 2 for me with women who gutted me with their gorgeous pipes, as the vivacious contralto of Martini’s China Forbes soared to the very heights of Kodak Hall, to the delight of a near capacity house. 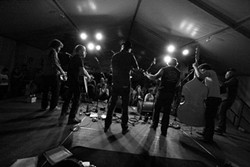 At the East & Chestnut Stage Dr. John waxed mondo cool in front of a giant throng, as if the scene was a Louisiana pool hall with just a few hustlers shooting nine ball on a weeknight. Most of his set centered around lyrical righteousness and spirituality, the kind that throbs only in the heart of New Orleans. He looked and sounded great. The crowd, however, looked a bit bedraggled. Pace yourself, guys. You got eight more days to go.

Last but not least I ended my night at the sweaty asylum known as Abilene, where the Hackensaw Boys were turning the joint upside down and on its ear. These guys are Jazz Fest vets, and were a wee bit more traditional than last time. But they still kept up the intensity and speed as they drove the crowd out of its mind, over the cliff, and into the hot night.

Saturday night I’ll be checking out Dr. Lonnie Smih at Kilbourn Hall, Delbert McClinton at East & Chestnut, John Mooney & Bluesiana at Abilene, and the one and only Willie Nelson at Kodak Hall.

What was your favorite show of the first night of this year's Jazz Fest?