UPDATE 5/21/13 to correct the spelling of Pat DiNizio's name.

The Slackers are just so cool. The Bug Jar was like a Frigidaire when these Brooklyn cats rolled through town to rock steady last Thursday night. The band's groove is punctuated by an understated beat; it hits your hips and feet but never clobbers you over the head. And sure the groove is a solid, mid-tempo, pulsing ska, but elements like David Hillyard's funky phrasing, hint at much more. The band sounded fantastic, though I would have dug a few more selections off its "Redlight" CD.

Friday afternoon marked my first plunge of the year into the sea of flowers and fried dough that is the Rochester Lilac Festival. Mikaela Davis was on stage with her abbreviated band and her mysteriously captivating sound. Davis' harp dwarfed its diminutive master as she coaxed a wash of electric, eclectic color from the instrument. It was further complimented by some colorful guitar accents and trills that in spots sounded psychedelic. Her overall sound was gentle and sweet. This is what I imagine lilacs sound like.

After Davis' dewy delights, came the sweat, leather, and denim of the upstate troubadours in The Brian Lindsay Band. As I've said many times before, Lindsay is our version The Boss -- imagine "Darkness on the Edge of Smugtown." Lindsay and his tight band of outlaws were loud and solid and rocking with a set of hard-hitting Americana, celebrating where we stomp, hang our hats, pick up our women, and brag about all of it. And there's just something about a Telecaster turned up and banged on and twanged on by a man with something to say.

Power-chord masters from New Jersey The Smithereens followed with a cool set of hits opening with "Only A Memory" and closing with "A Girl Like You" with plenty of nods to The Beatles and The Who, along with the band's own lengthy catalogue in a generous 90-minute set. The guitars were big and loud and front man Pat DiNizio -- also big and loud -- still has his smooth baritone intact, and was a charming host as the crowd lapped it up in the glow of the setting sun.

Made it back to the festival one more day to see Big Sandy and his Fly-Rite Boys play some simply perfect Western swing. Dressed in Hawaiian shirts and cowboy boots, the band was the stylistic equivalent of the sound on stage. Guitarist Ashley Kingman was on fire as the band wove in and out of its 25-year catalogue, playing for the rug-cutters who adapted to the grass and dandelions. 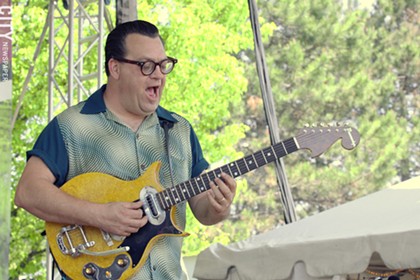 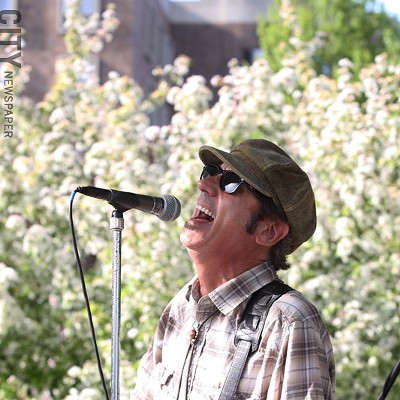