Skinny Lister, Fitz & The Tantrums, I Can Chase Dragons, This Mountain

Looking at my schedule Thursday morning, I knew I had a few panels to hit, but thought that my music schedule would be a little lighter. But as the great Dr. Ian Malcom once said, life -- or music -- tends to find a way.

My first musical treat of the evening was London, UK's Skinny Lister. The five piece (mostly) acoustic folk group somehow ended up in a giant hotel atrium that created a perfect storm of bad acoustics: a never-ending, Willy Wonka-esque high ceiling; a tiny PA system; a stage with a back that overlooked a walkway. And if that wasn't enough, the group upright bass player was also missing, struck down by some kind of Austin-based food poisoning.

It's all only worth mentioning because the situation didn't hinder the group one bit. Skinny Lister is great fun; a pub band, yet with signs of having legs to outgrow the small-scale bar scene. Accordion, mandolin, guitar, and plenty of foot stomping all made for a party that would make any wedding band taking notes on how to get people to dance, clap, and stomp along. At one point a member took a giant bass drum, walked over to the bar on the other side of the playing area, and stood up on top of it to keep the party going. This is just a sample of the good time you can expect with Skinny Lister.

Vocal duties were shifted between nearly every member, but donned-in-red beauty Lorna Thomas seemed intent on dancing (and drinking!) up a storm, spreading the party and joy to everyone around her, and her infectious energy made up for her lack of instrument.(Which is saying a lot in my book, as being on stage and not holding something, even if it's percussive, is a Willie Music Performance 101 Deadly Sin). Sadly, the only time she took lead vocals either her mic wasn't up enough or she wasn't projecting well, as I had a hard time hearing her. But, if Skinny Lister can rock a hotel lobby, I'd bet on the group anywhere.

In between bands I experienced my first SXSW miracle, a testament to the fact that music festivals like this really do work, for both writers like me looking for new acts, and bands just hoping to be discovered. I stumbled across This Mountain in the middle of the street playing a busker set, and stopped to soak it up. It was a flurry of acoustic guitars, a cello, and a banjo, all of which add up to music to my ears. This Mountain fought against the giant crowds and music overflowing from shows all around, and played for spare change (and practically gave CDs away). I'm adding them to my look-into-and-keep-an-eye-on-list. See, doubters? SXSW can work for everyone! And where else am I going to walk from one street band to another, and even catch a wolf playing violin? 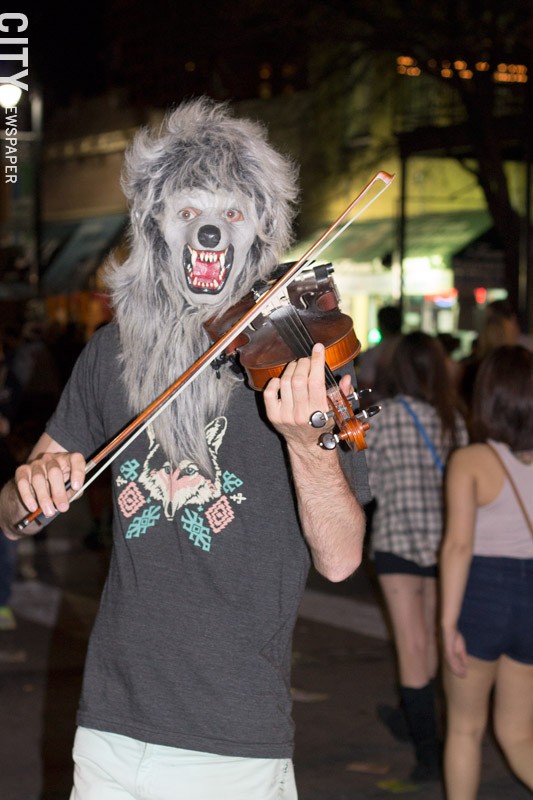 Next up I caught a few songs from I Can Chase Dragons, the experimental Mexican electro-pop side project of Julio Gudino (The Plastics Revolution). It was a soundscapey, grandiose affair, down to the projected images that accompanied the duo on the bar wall next to them. For me, electronic music really needs to be something that is active and danceable, not lofty and intangible. And I wasn't really sure how the music was supposed to make me feel. (Or maybe the point wasn't to feel, but to think?) It was more dream-time music than anything else, but it wasn't like we're talking Hungarian horntails or something here.

All the way across town I managed to catch the last song-and-a-half by punks Fidlar. (Stands for Fuck It, Dog, Life's A Risk). The show was in what seemed to be an old warehouse, so acoustics were bad and echo-riddled at best. Given punk's nominal song length, I don't want to speak much to them after just a taste. Hopefully I will be able to catch more of the group later this week.

I ended the night at the Austin Music Hall with Los Angeles's Fitz and the Tantrums. This was a pretty much blind jump into a band for me, but it has toured with the likes of Flogging Molly, Hepcat, and Maroon 5, so that's worth giving some attention to, right?

At least, that was that I thought. The proclaimed soul/pop band left me pretty flat. Dual vocalists Michael Fitzpatrick and Noelle Scaggs led the six-piece band (which included keys and saxophone) through songs that were just too sweet, pretty, precise, and polished for my tastes. To some, that might not be a bad thing, but I had a hard time feeling the soul. Instead I wondered where the line between soul and subpar, boring, poppy vocal-laden jazz music is. I wasn't digging it, and it wasn't moving me; we're talking swaying music at best. I stayed for a few tunes, but SXSW, much like Rochester's own Jazz Fest, is competitive, and if something isn't clicking, there's a million other things at the same time worth diving into.

For what I thought was going to be a quiet and early evening, I ended up passing through a lot of stuff. The whirlwind continues, and I feel like two of the busiest days are still ahead of me. We've got great acts this weekend, including Frank Turner & The Sleeping Souls, Chuck Ragan, Murder By Death, Less Than Jake, and more, so don't let up on me yet! SXSW is just getting warmed up.