The Indie Music Channel brought its Indie Music Revolution Festival to Water Street Music Hall this past weekend. The event boasted a cornucopia of young talent, including plenty of stuff from the home team. I caught Methanol Friday as the band blasted its big rock with hooks. This group has really settled into a solid groove and has transcended its influences; it owns its own brand of rock 'n roll. Methanol ended its set with guitarist White Mike smashing his guitar a la Townshend, to my secret delight. 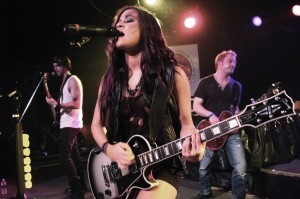 Saturday brought night No. 2 of the revolution. Brooklyn Haley -- a new teen sensation who wouldn't stop texting while I tried to talk with her -- was on stage track singing as I made the scene. It was pop fluff that the kids seemed to dig. But then Rochester's Melia came out like a torpedo, or, more accurately, a black-and-purple pinball in hot pants. She not only performed but commanded an eager crowd pushed up to the stage, all the people in it seemingly having a working knowledge of the Melia songbook. Then Melia strapped on her steely Les Paul and let fly. This lady can shred. Her songs are complex, but not too heavy; sweet in spots, but they don't leave you walking away with a toothache. It was to Melia's credit that the Indie Music Channel put Rochester in its crosshairs to begin with, as she had won three awards at The Indie Music Channel Awards in Hollywood for Best Female Rock Artist, as well as Best Rock Song and Song of the Year for her tune, "Just a Bride."

For a soulful 180, Ronnie Lickers performed with his Goodbye Ronnie outfit for a set full of stark wonder and dusty atmosphere. I love the new record. It caught me off guard, like Joe Henry's "Tiny Voices."

Between getting clobbered for two nights at Water Street, I spent a beautiful day at the Corn Hill Arts Festival's Gazebo Stage, where I got to hear some Big Easy, not-too-greasy New Orleans/Dixieland stroll from The Roc City Stompers, some analog dub-step with Roots Collider, and the classic bluesy swing with the always stylin' and profilin' Electro Kings. I made my way over to the main stage where The Campbell Brothers were laying it down hard. They were smack in the middle of a foot-stompin' gospel throw-down. The Campbells never fail to bring tears to this heathen's eyes. Hallelujah!