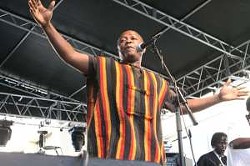 So, we've reached the end: the last day of this year's Jazz Festival. It's been a long ride, but there was still a lot going on Saturday night worth talking about.

First up was theSierra Leone Refugee All-Stars. Now, for better or for worse I try to leave politics aside when looking at a musical group. For as many good things as the group has done, including its documentary on forming in a refugee camp during Sierra Leone's civil war, I just couldn't get into the music.To be fair, I've never really been a reggae fan. I was expecting a much more African folk sound from the group, and instead got a very reggae vibe. Say what you will, but I just couldn't dig it: it was all too circular and too similar.

Next up was Gov't Mule. I've always been a fan of seeing more rock-centric acts on the free stages during the big weekend shows. Smash Mouth? I was down with that. In fact, the festival seems to use these big rock-heavy acts to bring in the younger, drinking, free, crowd, so I'm not sure why they don't expand and just make one of those stages a rock stage while they are at it.

Not that there's anything wrong with that; it just tends to not excite me as much as it could. Though, I will say that some of the band's solo work may have been the tipping point to bringing them here. But I have to ask the question: if you are putting rock bands on a stage to attract a younger crowd, shouldn't they, you know, be younger-attracting bands?

Last, and my saving grace for the day ,wasLocarnoat the Big Tent. Such a treat on which to end the festival, this group was what I wished every Mexican- or Spanish-leaning group I saw this week sounded like: a mix between mariachi, a few splashes of rock, some loud, blaring, bright horns, and yeah, let's throw in some violin for good measure. 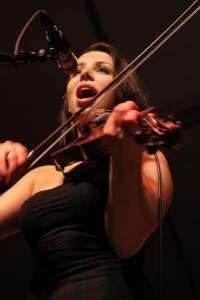 I can't believe Locarno was also the first, and only time, I saw a violin all week, and it was great to hear that sound coupled with the trombone, trumpet, and guitars. It was the second-best show of the festival (trailing the ZydecoHellrasiers, of course), and a great last note to leave the festival on.

And I mean, come on, the band closed with "La Bamba." Always a party.

Now that the festival is over, who were some of your favorite acts? Who should come back next year, and who do you wish would have played but didn't? The festival is listening, so share your thoughts below.