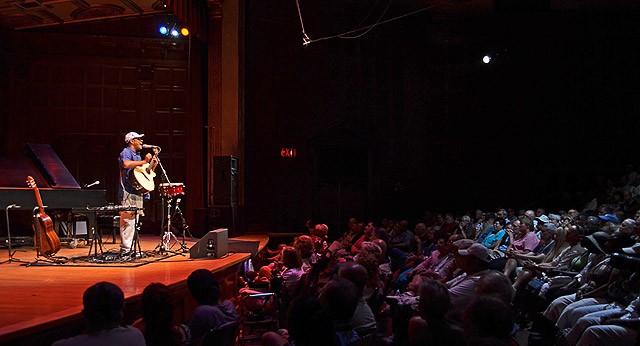 While tapping guitar chords with his left hand and keeping up a steady beat on the bongos with his right, Raul Midon turned to the Kilbourn Hall audience Saturday and said, "I want you to notice there are no looping machines up here." He didn't need any. He picked, strummed, and slapped percussively on his guitar, pausing occasionally to play a melodic run at breakneck speed. Then he added the trumpet that he seems to have built into his mouth. It's uncanny in its resemblance to the real thing. Midon can "mute" passages and hit those slightly flat notes that seem to go with the instrument while "playing" beautiful solos.

There are several ingredients to being a successful singer/songwriter; among them are personality, intimacy, and having great stories to tell between songs. Midon has all of them in abundance, but he has a lot more. In addition to his breathtaking guitar technique and Stevie Wonder-like voice, he's got an unusually exuberant songwriting style. You can feel the emotion in his tunes because he doesn't follow any rules. As a result of all of this, Midon had the audience in the palm of his hand all night. I guess I should mention that he's blind, but aside from figuring into his story-telling, it didn't matter.

Joanne Brackeen seemed oblivious to the fact that there was an audience in Hatch Hall for her concert Saturday night. Between songs she spoke quietly to a couple of friends in the front row. In the middle of her set a saxophonist joined her for a couple of tunes. Then he left. From what I could hear, she told her friends something about bumping into him in the hotel lobby. It took shouts from the audience -- "Who was he?" -- to get her to say: Pat LaBarbera.

Aside from that, she was great. Her playing was sparkling. If she had told us the name of any of her tunes I could tell you that one of them, the second she played, was especially wonderful, with an odd march-like quality. LaBarbera and Brackeen played a terrific version of Duke Ellington's "In A Sentimental Mood." And she played a beautiful solo rendition of Cole Porter's "Ev'ry Time We Say Goodbye" (the one tune she named).

Clarinetist Arun Ghosh never stopped moving when he led his quintet in a show at Christ Church. He was kinetic in both his playing and his dancing. It just seemed to be in his personality. Ghosh led his band through mostly original tunes that were derived from his southern Indian roots (West Bengal) and his Manchester, England home. Everything the band played had a joyful quality to it.

While his bassist and drummer had come over from England with him, the alto and tenor saxophonists in the band were Rochester's own Colin Gordon and Doug Stone. While they usual played the more steady parts, allowing Ghosh to soar over them, they both took adventurous solos. They fit right in even though they had just joined this somewhat unusual ensemble the day before. The show ended with an energetic take on The Beatles' "Tomorrow Never Knows." Ghosh explained that because John Lennon was influenced by Indian music when he wrote it, the band was bringing it full circle.

Looking back on XRIJF 2012, I can't imagine any other conclusion: it was bigger and better than ever. This year I only saw one headliner and I had to put my fingers in my ears to avoid instant deafness as a result of the ridiculous sound levels of the outdoor shows, but I still loved the festival. My favorites of the past nine days are all over the place in terms of style and content and that's what makes this festival great. Here they are:

-Vocalist Tessa Souter took a chance on songs merging classical melodies with her lyrics and a jazz sensibility at Montage.

-Yggdrasil & Eivor managed to conjure up that ancient Nordic magic at the Lutheran Church.

-Eldar delivered one of the greatest performances I have ever witnessed when he played "Rhapsody In Blue" at Hatch Recital Hall.

Now that the festival is over, who did you like best?