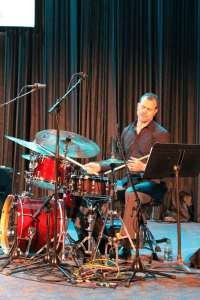 Well, every night can't be a face-melting, accordion-fueled dance party.

After the zydeco chaos that was Thursday at the Jazz Fest, Friday night I operated on the more traditional and laid-back end of the jazz musical spectrum.

First up was the Rochester Metropolitan Jazz Orchestra under the Big Tent. Another big band from Rochester (in case the name didn't give it away), the group was made up of local community members playing big-band charts. This group, and groups like it, are the backbone of our local music scene, and it's great that the festival gives time to local acts admidst everything else it has going on. The vocalist's singing reminded me of Las Vegas (or at least "CSI," which is as close to Vegas as I've come), which was a nice touch. But the group had a few snafus here and there and just didn't blow me away. It did pick some cool pieces and had some neat stuff here and there, but it just wasn't as extraordinary as some of the acts this week have been.

(But, to be fair, I did cheat a bit and caught some of Dwayne Depsie and the ZydecoHellraier's free Jazz Street stage set. I won't say anything else, as I said it all yesterday).

From there I headed over to Xerox Auditorium to catch the RobiBotos Trio. The group, featuring Botos himself on piano, as well as string bass and drums, was one of the better-suited acts for the auditorium I've seen this festival. Starting off simply, quietly, the group soon took on the characteristics of a locomotive: quiet start, wheels slowly churning, steam starting to pour, and then a relaxing, yet steady, speed taking over. At top speed the group wasn't quite at a jet-engine roar, but even a musical train can chug powerfully along and give its passengers a pleasant ride. I was glad I gave the group a chance, and the string bass solos were quite enjoyable.

But, before heading over to Xerox I did manage to catch a shorter-than-I-would-have-liked glimpse of the Po' Boys Brass Band, a local high-energy funk-rock outfit that's always a treat. It seems that the rumors I heard that the band was now sans tuba player (a mortal sin) actually aren't true. The group does have a tuba player, just one that alternates on electric bass (only a venial sin). Either way, the group always rocks. How about we end on that note tonight? Carry on, my wayward sons.