You have certain expectations when a band has the word "hellraisers" in its title.

So, Rochester, let me tell you a little story about Dwayne Dopsie & The ZydecoHellraisers. 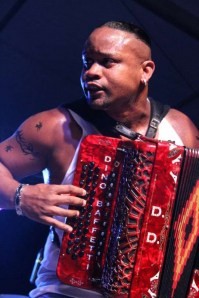 The band came out on the Big Tent stage Thursday night jamming, but with accordionist and front man Dopsie nowhere to be seen. His saxophonist jumped right into the crowd, getting the partying and dancing started as the rest of the band worked to pump things up. Electric guitar blaring, washboard rocking up and down, metal clicking and clanking.

Not your typical start to a concert.

And then, like waiting just the right amount of time before pulling the curtain back on a play, Dopsie walked -- no, pranced -- out on stage, picked up the accordion, and started blowing the crowd's faces off, one at a time. He didn't raise hell, he strode into it, kicked out Beelzebub, tore the place down, and rebuilt it as an altar to sweaty, zydeco-fueled rock parties made from the underworld's ashes.

That said,Dopsie's solos were more like something out of heaven, surrounded by the loud and raucous band behind him. But boy, he played the living shit out of that squeeze box. There's a reason he refers to himself as the King of Accordion, a title he earned making all the crowd members vassals in his new kingdom.

And that was all while chewing gum. Some people can't walk and chew gum at the same time. Dopsie was cool as can be on stage, yet the sweat was pouring from his head as his fingers flew faster than blazes.

At one point during another player's solo, Dopsie ran off stage, started a dancing line around the tent, and sorry to break the journalistic fourth wall, but as I ran over to grab a shot, he stopped, posed with the fan he was with, shook my hand, and danced away.

I left thinking that Dwayne Dopsie & the ZydecoHellraisers are to zydeco what Flogging Molly is to Irish music, what Gogol Bordello is to gypsy music, and what awesome is to awesome music. It was one of the best groups, if not THE best group, I've ever see at the Jazz Fest, and an amazing performance of the musical arts.

Earlier in the night, I also got to check out TerjeRypdal & The Bergen Big Band at Xerox Auditorium. The group was dark, ambient, tonal, and moody, which stood out amongst most other acts at the festival. It scratched my itch for the low end of the musical register, though I didn't think it would be at the hand of a group's clarinet section, which started off the show and eerily danced among the lower ranges of woodwind sound.

The group produced some weird, weird stuff, and that's why it stood out. It was almost spooky in its arrangements. And like a good thriller, the show gripped my attention; it put listeners on the edge of their seats, never knowing which twists or turns (or goblins) would be around the next corner.

And last but not least, I got to see Rochester blues band the Barrel House Blues Band on the Fusion Stage. The group was as hot as the weather, combining rocking blues guitar and great blues vocals. I know it's a little easy, but I just can't resist: the group was a barrel of fun.