CONCERT REVIEW: Sarah McLachlan and the RPO at CMAC

Tuesday night, Canadian singer/songwriter Sarah McLachlan, performing with the Rochester Philharmonic Orchestra, brought down the house at the Marvin Sands Performing Arts Center in Canandaigua (CMAC). For a good two hours McLachlan sang from more than 20 years of songs, ranging from classics we know by heart ("Adia," "Building a Mystery") to selections from her more recent CD, "Laws of Illusion" ("Rivers of Love," "Love Come").

CMAC was the third stop on a three-week tour in which McLachlan will perform throughout the United States and Canada with more than a dozen symphonies. Accompanying McLachlan on the tour is arranger and conductor Sean O'Loughlin, profiled earlier this month by City. 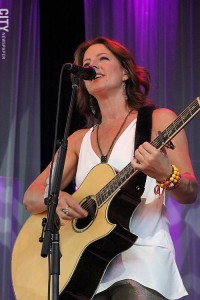 The weather was picture perfect. The stage at CMAC comfortably accommodated about 50 musicians from the RPO, along with McLachlan's band of bass guitar, acoustic guitar, synthesizers, and drums, as well as her own electric piano and acoustic guitar. And the expanse of CMAC as a covered/open-air venue extending back to a grassy knoll handily suited McLachlan's enormous vocals.

McLachlan performed for approximately two hours, most of the songs featuring the RPO. About mid-way through the second set, starting with "Adia," McLachlan began to let go and open up her voice. By the time she spun into the final four songs ("Possession," "Bring On the Wonder," "Angel," and "Ice Cream"), she had the audience thronging the stage, holding up cell-phone camera screens where once lighters would have been aflame.

So let's get right to the bottom line on this new adventure for McLachlan: at the end of this symphony tour, McLachlan should lock herself in Eastman Theatre with the RPO and conductor/arranger Sean O'Loughlin and not emerge until they can deliver what could readily become the CD of her career.

Two weeks ago, I interviewed O'Loughlin for City, and he staked the claim that even longtime fans of McLachlan would find her entree into the world of a classical symphony to be a fresh experience. As someone who has lived with McLachlan's music as part of my life for more than two decades, O'Loughlin's claim was no exaggeration. Last night's symphony concert was the beginning of something great for McLachlan.

The first song of the second set was "Good Enough," and it was the best example of the possibilities of this new approach. For that song, McLachlan grabbed her 12-string, back-up singers Melissa McClelland and Luke Doucet, dropped her drummer, and allowed the RPO to do what O'Loughlin is capable of arranging it to do. O'Loughlin's tempo brought the song from being sad into being soulful. The RPO string section became consistently audible, and the score not only enhanced McLachlan's melody, it took on a newer, deeper shape.

Between O'Loughlin's classical training and the excellence of the RPO, other songs, like "Forgiveness," transformed from the edge of bitter to matured introspection. O'Loughlin's arrangements were logical progressions of the original songs. He lost none of the elements that created McLachlan's hits, but he took the natural power of McLachlan's voice and pushed it to new heights through the use of the symphony as an instrument.

This notion of "cross-over" artists into the world of classical is an interesting one. For me, McLachlan's vocal command, range, and natural stage presence mean that she can easily let go of pop elements like a standard drum set and utilize the RPO's percussion section, which would also give her a much greater range of instrument textures and tones for some of the prominent rhythms in, for example, "World on Fire" and "Full of Grace." Then, too, with a gem like "Sweet Surrender," she could actually bring the oboist center stage and connect with the oboe as a soloist, the way she is used to doing a back-and-forth with other guitarists on stage.

And, just to make sure my role as a troublemaker is complete, I would be hugely curious to see what would emerge if McLachlan and O'Loughlin were to collaborate in writing a completely new piece of music from scratch, pairing her talent for melody with his knowledge of orchestral scoring.

Two thumbs up for McLachlan, O'Loughlin, and the RPO. I can only put it out there that if McLachlan heads into the studio with O'Loughlin to pursue this concept, she would be well served to have the RPO by her side.