You can have Heaven. Hearing Eldar play "Rhapsody In Blue" on a perfectly tuned Steinway piano in Hatch Hall Monday night is enough for me. He played it a little faster than usual, and a little bluesier, kind of like the original rendition by George Gershwin himself. It was the perfect ending (save the encore) to a wonderful set by Eldar who, though now in his mid 20s, still looks like a teenage prodigy.

In an hour-long set he played standards like "I Should Care" and "Embraceable You," jazz classics like "Moanin,'" and original compositions like "Hope." The common denominator was insanely brilliant technique. I don't think I've ever seen hands move across a keyboard as fast as his did. But it would be nothing if it were merely dazzling; he is also a supremely sensitive player.

Eldar was on fire from the start, but things got even more intense when he segued from his own tune, "The Exorcist," into Prokofiev's B-flat Sonata, his hands spidering over the keys. That was just the beginning. Next came "Rhapsody In Blue," an incredibly challenging piece requiring equal measures of classical mastery and jazz sensibility. Eldar took it in stride, cross-hand parts and all. He got the largest ovation (in the smallest hall) that I've witnessed so far at the XRIJF. 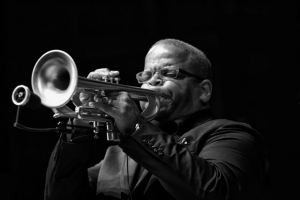 As for the two trumpet players I said I was so anxious to see in last night's blog, I was disappointed by both. Terence Blanchard led a fine band at Kilbourn Hall. And there were great solos by his pianist Fabian Almazan and saxophonist Brice Winston. But Blanchard himself was more into electronic gimmicks. The first one he used, producing an echo when he played, made him sound like the Kenny G of trumpet. The second, which somehow made his single trumpet notes into chords, had a side-effect of shrillness.

Blanchard used the recorded voice of Cornell West at the beginning and in the middle of his composition, "Choice." After hearing West say, "Beethoven said music is deeper than philosophy," I couldn't help wondering why I was listening to the voice of a philosopher instead of the music.

But Nicholas Payton at Xerox Auditorium was the biggest disappointment. The group was a trio with a bassist, a drummer, and Payton on trumpet and keyboards. At the same time. There were exceptions, but much of the time Payton had his right hand on the trumpet keys and his left on the keyboard, doing justice to neither. I kept wondering why I was listening to one of the best trumpet players in the world noodling on the electric piano.

At one point he began repeating the first phrase from Miles Davis' "Milestones." Just the first phrase. Once in a while, with two hands on the trumpet he would start to get into something interesting, but not for long. It might have gotten better, but after a half hour, I'd had enough. Simple is one thing, simplistic is another. This was the latter.

Tuesday night will be a bit more on the avant-garde side for me. I'll be hearing IPA at the LutheranChurch and NeWt at ChristChurch. But, I'll keep one foot in the mainstream with the Benny Green Trio at Kilbourn Hall.

Where did you go Monday night? What shows are you most looking forward to on Tuesday?