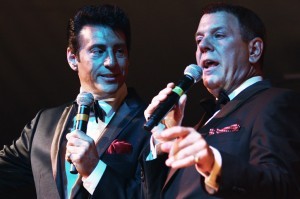 I dug into my roots (half of them anyway) and spent the weekend at Festa Italia at EdmundLyonPark in East Rochester. Besides the copious amounts of food I consumed, I was there for the music. Ray Massa's EuroRhythms got things going Friday night as the accordion-driven band from Columbus, Ohio, ping-ponged between traditional Italian and Italian-American favorites. It ain't a party until you hear you some Louis Prima. Or maybe it's just that I really identify with the lyrics to "Just A Gigolo."

The highlight of the weekend had to be the Vegas-style Frank Sinatra/Dean Martin tribute show. Now, it's no mystery how I feel about cover bands and artists. But this was a spectacular, well-researched, well-executed show with the performers successfully blurring the line between themselves and the venerable originals. It was as thorough and spellbinding as the Broadway endeavor "Million Dollar Quartet" that played last fall at the Auditorium Theatre. The personalities were just as important and captivating as the music.

Henry Prego as Frank Sinatra and Joe Scalissi as Dean Martin admirably took on the mannerisms as well as the singing styles of these legendary crooners from their infamous Las Vegas/Rat Pack era. Scalissi in particular remained in character even when offstage, chain-smoking, chain-drinking, and cracking wise. Prego was well-studied in the music's vocal nuances, I got to spend some time with him later that night at Bistro 135, discussing tonal subtleties over chocolate milk between tunes by Ella Fitzgerald, Doris Day, and Julie London.

But it wasn't all music for the paisans at Festa. On Friday night The Coupe de Villes laid down its hard-driving, nouveau-classic blue boogie a la the Fabulous Thunderbirds, with Tommy Bianchi wringing the sting out of the high notes. Saturday saw Mitty & the Followers cutting a soulful groove into the afternoon heat as guitarist Steve Lyons wrung his guitar's neck as well.