Curtain up: the spotlight focuses on a gaggle of geeks at a gay bar in Rochester, NY. A lonely blogger among them downs not one, not two, but three Maker’s Marks on the rocks while worrying about if he will be able to sufficiently retain the goings-on of the episode playing on the multiple flat-screen TVs. After a rousing rendition of “In the Navy” by the Village People and some random, much-appreciated shirtlessness, he no longer cares. All he knows is that the “RuPaul’s Drag Race” viewing parties at the Bachelor Forum are a hoot, host Darienne Lake is a delight and surprisingly candid about the goings-on during the show, and he highly recommends heading out to the parties to anyone in the Western New York area. (He also wonders what kind of depraved acts he must endure in order to get a drink in 15 minutes or less, because he will totally take that hit.) 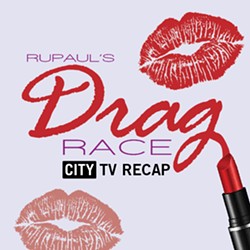 So, it was a good time at the Bachelor Forum on University Avenue in Rochester, NY. But it was a mixed bag for the contestants of Season 6 on “Drag Race.” After a “female or she-male” mini-challenge that I’m fairly sure will infuriate the trans* community, we got to the main challenge: “Shade! The Rusical,” a live musical-theater extravaGANza. The challenge was very much in the spirit of the ballet challenge from last season. But while Alyssa Edwards was the clear winner of that round, a handful of queens really shined this time around. Unfortunately the rest of them receded mostly to the background.

After the mini-challenge, in which Adore Delano and Ben DeLaCreme came out on top, the teams shook out like this. Team DeLa (Act 1) featured Ben, Courtney Act, Bianca Del Rio, Darienne Lake, Gia Gunn, and Trinity K. Bonet. Team Adore (Act 2) featured Adore, MILK, Joslyn Fox, April Carrion, and LaganjaEstranja. As we saw in the previous episode, there was a huge difference in ability between the two groups. Act 1 was interesting and gamely played by the group members, while Act 2 was mostly a mess, save for decent performances by Adore and MILK.

Let’s get this conspiracy theory right out of the way: after last episode, many people wondered why Adore -- the clear loser of the horror challenge -- was spared the Final 2 in lieu of April Carrion. It made absolutely no sense at the time, considering that Adore failed as an actress, as a leader, and on the runway. (I’m sorry to Adore fans, but that’s just the blunt reality of what went down.) The reason she was kept around was almost certainly this episode, in which the show itself (via Ben DeLaCreme) referred to the proceedings as “The Battle of the ‘Idols.’” That would be “Australian Idol” contestant Courtney Act and “American Idol” contestant Adore Delano (Danny Noriega). The show was going to give us this “showdown” no matter what, not unlike the painfully manufactured drama between Alyssa Edwards and Coco Montrese last season.

So Adore, despite biffing the first two challenges almost completely, was almost certainly a lock for this episode, no matter what she did. Thankfully she made it worth the audience’s while by putting in a solid performance this go around. Her lead actress role in Act 2 was well sung and well executed, even if her final “red carpet” runway was, again, sloppy and underwhelming. My fear is that this episode was Adore’s high point, and that doesn’t speak terribly highly of this queen at all. She actually told the judges at one point that she’s a much better drag queen than what she’s showing. Girl: it’s Episode 4. What the fuck are you waiting for? A party/event invitation via Adam4Adam? (My bad; Scruff is a sponsor of this show now.)

Courtney Act, however, killed it as the ingénue of Act 1. Courtney looked terrific and sounded like an actual woman when she sang. One of the judges -- Michelle Visage? -- mentioned some bum notes, but I don’t what the hell she was talking about. My feeling watching the two groups was that the first group sounded pre-recorded (in a good way), while Group 2 sounded like they were singing live. I don’t know if that was due to the gulf in talent, to the production values, or due to the three bourbons, but Act 1 sounded a hell of a lot better than Act 2. Even with Gia’s nasal grind.

The other queen to really command the stage was Ben DeLaCreme as Shady Lady. The judges (including the delightful Sheryl Lee Ralph, who was too cute for words, and RuPaul’s musical partner, the twinkilicious Lucian Piane) referenced Ben’s Bettie Page realness. But Ben was great throughout the challenge, and I desperately hope that the judges see the versatility Ben has given us so far in this competition. Because I have this awful fear that they’re setting him/her up for a shock boot in a few weeks.

Ben, Courtney, and Adore ended up in the top for the challenge, with Courtney taking the win (deservedly so, in my opinion). The Bottom 3 came down to Darienne Lake, who the judges felt failed to make an impact in the challenge; Trinity K. Bonet, who was dinged by the judges for her terrible diction but really should have been called out for her atrocious attitude in rehearsals; and April Carrion, who they felt wasn’t convincing in the “big girl” role.

Darienne was blessedly spared -- it was dubious that she was in the Bottom 3 to begin with -- and April and Trinity lipsynched to “I’m Every Woman” by Chaka Khan. April was again dynamic and aggressive, but Trinity had that lipsynch in the bag as soon as she started busting out some of those old-school drag-ball moves that RuPaul loves so much. As soon as she started working that hand fan I knew it was over.

So, unfortunately, it was “Sashay away” to April Carrion -- and that is a travesty. Over the past two weeks April was railroaded harder than perhaps any other “Drag Race” contestant in recent memory. (At least on the show. I hope some of them are getting railroaded hard in real life. Get it, girls.) April had no business being the bottom last week; a decent if unspectacular challenge performance, and an eye-popping runway look do not a LSFYL make. This week she definitely wasn’t great as one of the three back-up queens to Adore’s lead actress, but if you’re going to single out April, why let Joslyn or Laganja escape without notice? NONE of them were good, and yet April was again made an example of for no discernible reason. OF COURSE she wasn’t believable as the “big girl.” Have you SEEN April?! She is never going to read “plus sized” no matter how much padding you stuff in her dress.

While I have enjoyed this season -- and I continue to enjoy it -- April’s ouster really speaks to producer shenanigans more than anything else. There were certain queens this time out who had absolutely no shot of making it even halfway through, no matter what they did. April was one of them. For whatever reason she was dismissed fairly bluntly, and that is a shame, because I think she conducted herself well in her three weeks on air. Certainly I think she made more of an impact than Gia (who is firmly ensconced in the protective bubble of the Early Bitch Edit), Joslyn (who I enjoy, but who is being given a VERY easy time by the editors), Laganja (virtually invisible this episode), and even MILK. And I love MILK, but the most noteworthy part of her “Rusical” performance was her Grizabella Realness.

Speaking of the others, Gia really showed herself to be a piece of work on “Untucked,” coming at MILK’s pregnancy red-carpet outfit (I died) and critiquing her lack of “versatility.” Oh, that is a LAUGH. Gia Gunn criticizing any drag queen on their lack of versatility. Call me when you serve up something that doesn’t involve gills, sweetheart. Better yet, call me when you give us fishy that actually passes the Gorton Fisherman’s muster. Because for all your talk, you are still vulnerable to the clock. Her viciousness really reached new heights this episode, and I suspect many of the people who viewed her as a harmless, dim creature (*ahem*Tom and Lorenzo*ahem*) might be changing their tunes. She’s nasty, and I don’t have time for it. Don’t be so offended by someone calling you ignorant if your definition of drag is limited to the sale rack at DEB. *Mic drop*

As for the nearly eliminated Trinity, she did herself absolutely no favors this episode vis-à-vis the “baby Tyra Sanchez” comparisons that have dogged her since this season’s queens were revealed. Trinity displayed massive attitude in rehearsals, looking to put in the absolute minimum required effort to skate through to the next round. (Let me quote the always-reliable Jujubee here: “America’s Next Drag Superstar is not going to be a lazy bitch.”) While she did end up pulling off a decent performance on the mainstage, she was obviously a source of stress for her group, and was argumentative from pretty much the get-go. Her stank faces at the criticism just underlined how ill-prepared she is for this competition. The judges brought up her terrible diction as the main flaw in her performance this episode, but the larger issue is the fact that Trinity -- despite being able to deliver when the chips are down -- is someone that, frankly, I assume would be infuriating to work with.

Anyway, I am irritated that April was eliminated, mostly because she really never had a shot in this competition. I think in any other season she would have been Top 6, given her beauty, her creativity, and her passion. This time, the producers/editors obviously eyeballed her as “dispensable” and set about engineering her exit with fairly weak justification. But it IS a stiff field this time around. And that’s why I’m hoping the editors take a goddamned seat and let the queens rise and fall on their own merits. If they continue to prop up some of them (*cough*Gia, Adore, the increasingly forgettable Laganja*cough*) and work to minimize the abilities of others (Darienne, Ben), I’m going to get increasingly frustrated increasingly quickly.

A final note: the viewing party at the Forum really was a lot of fun. Miss Darienne Lake spills the T about what was going on behind the scenes, and she’s funny and charming and very cool about taking pictures with nerdy newspaper types like myself. The crowd was enthusiastic (and quite good looking), there was some kind of diversion involving men in wigs, etc. It’s definitely worth coming out if you’re in the area. But note: they cut off that 3-for-2 deal at 9:15 p.m., regardless of how long you were waiting at the bar to be served (*ahem*). So plan accordingly. A friend of mine did get a killer deal on Tequila Sunrises, though…