After the (I think smart and successful) two-part premiere, the 12 remaining queens were thrown together for the first big challenge. The mixing of the two groups provided some interesting moments. Some queens, like Ben DeLaCreme, welcomed the others with open, fabulous arms. Others, notably Gia Gunn, were extra crispy bitchy. I like my drag queens with a healthy amount of shade, but Gia falls squarely into the category of Bitchy Bitch, not Fun Bitch. And she’s especially in trouble this season, because Bianca del Rio, Queen of the Fun Bitches, is in the house, and she is going to destroy Gia. And it will be amazing to watch. And I suspect RuPaul will approve, because -- spoiler -- she obviously is not a fan of Gia, especially after this episode. 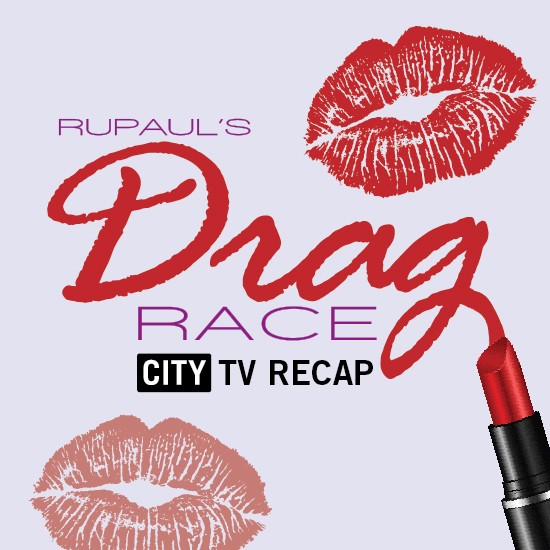 After a hilariously cute, but utterly pointless, mini-challenge, the main crux of the episode was a team acting challenge. Team leaders MILK and Adore Delano ended up dividing the contestants along the exact same lines as the groups from the initial episodes (Team Milk consisted of Courtney Act, Darienne Lake, Bianca del Rio, Trinity K. Bonet, and Joslyn Fox; Team Adore had Laganja Estranja, April Carrion, Gia Gunn, Ben DeLaCreme, and Vivacious). The teams had to shoot a horror-film trailer. MILK’s was set in the 1960’s, while Adore’s was set in the 1980’s.

For a horror challenge there was precious little suspense. These two groups are completely mismatched -- something many viewers commented on after the two-part premieres -- and Team MILK was obviously getting the win. Trinity needed quite a bit of direction but turned in a solid performance, while MILK oddly failed to impress in the crazy old lady role. Adore’s team crashed and burned almost entirely, with the exception of Ben DeLaCreme, who killed it. The rest of the group was miscast or unprepared, none worse than team captain Adore.

And so, it was frankly bullshit when Adore ended up toward the bottom of the heap, but not lipsynching for her life this episode. Nothing about that scenario added up, except for the act that the producers clearly love Adore -- or at least they think that the viewers love her -- and so they want her to stick around for a while. But based on her lack of preparation for the challenge, her lousy job as team leader, and the fact that her runway look was the least polished of the Bottom 3, there’s no reason she shouldn’t have been lipsynching.

Instead it came down to April Carrion, who was woefully miscast as a butch lesbian in the horror flick, and Vivacious, who totally struggled with both her lines and delivery. They both turned in decent lipsynch performances, but April had just a little more attitude/hunger, and Vivacious had to sashay away. It’s a pity. Vi had great talking heads, some eye-popping outfits (for this episode she came “dressed like Godzilla,” TM Bianca del Rio), and a great attitude. Although she was weak in the challenges, you could see her struggling with the de facto ageism on display with the younger queens in her group. (I wonder if she would have fared better with the more mature queens in Group B?) But I will miss her. She was fun. Vivacious: please say hello to Ornacia, and also that queen who apparently dresses like a furnace. She sounds fascinating.

Of course, had it been Vivacious vs. Adore -- which it SHOULD have been -- I don’t have a doubt in my mind that Adore would have been sent packing. Please understand, I like Adore. I like Danny. I find them both oddly charming. But RuPaul was dead right when she said that Danny/Adore has skated by on her charisma thus far in life, and doesn’t really know how to put in serious effort. That was painfully evident in both Adore’s challenge performance and in the way she reacted to the criticism leveled at her. Sour, sour faces, sulking, and awful energy. And the truth is, Adore has been struggling almost this entire competition. She may have come in as a huge fan favorite due to Danny’s time on “Idol,” but this is a very different game, and she’s not prepared for it. What’s worse is, she knows it. And RuPaul has her number, hussies.

RuPaul also sees right through Gia’s bullshit, and she called her out for it on the runway this episode. (Ru does not seem to be holding anything back this season, and I for one am glad for it -- this crop is strong enough that they can take it, or should be able to, at least.) Ru specifically lambasted Gia for her lack of craft and polish during the acting challenge, and more or less put her on notice that she knows Gia is all talk and very little ability. Gia is also -- I’m just going to say it -- not the brightest queen in the bunch. She can hurl an insult, but for all the burns she’s dishing out, the editors are dousing her in flames with their hilarious framing of her many Duh Moments. This episode: Delorean, black-and-white films. Both classic “Drag Race” edits.

Other things worth noting from this episode:

*Darienne Lake won the main challenge for playing a bewitched head in a box. Yay, Darienne! She was also funny and charming, although I suspect she’s going to get some shit thrown at her online for her kaikai remarks.

*Bianca and Courtney seemed to have formed a weird bond, and if I was any other queen in this competition, I would be terrified. Those two are alpha dogs, and if they’re a team, the rest of you are screwed.

*Ben desperately needs to get saved from the kiddie pool, because Laganja, Gia, and Adore are doing her absolutely no favors. Even Santino said that had Ben been in the winning group she probably would have won the challenge.

*Speaking of Laganja Estranja, I cringed again at her self-absorption and what I perceive as faux emotionalism in “Untucked.” The entire losing group told the judges that Vivacious should be the one to go home. OK. I get that. But then on “Untucked,” the younger queens -- especially Laganja -- were basically harassing Vivacious into telling them it was OK for them to throw her under the bus en masse. And that is bullshit. You said what you said. Own it. She felt ganged up on and did not have to tell you that was fine. You’re playing a game, sure, but if you feel guilty for railroading her -- which Laganja and probably Adore certainly did -- that is on you. Leave the poor woman alone.

*I cannot for the life of me figure out Joslyn. She seems like such a ditz, but she did well in the challenge and then had me roaring with her reactions on “Untucked.” She is an enigma. A derpy enigma.

NEXT: “Shade: The Rusical”! It’s an “Idol”-Off between Adore and Courtney!