"You're not squeamish are you?"

"American Horror Story" was a smorgasbord of sensory proportions tonight: but like any good feast, sometimes enough is enough, and you wish you hadn't had that last bloody slice of meatloaf.

Appetizer: Jab, swish, stab! We pick up mere seconds after last week, with that silly little couple face-to-face with Bloody Face (and whoever is playing him/her). Poor Leo (Adam Levine) got beaten into the ground and quite brutally stabbed, making it, if I had to guess, quite harder to breathe.

But tense right? Hell yeah it was, and then we jump right back to Briarcliff and 1964, but not before a quick detour to another haunt of Bloody Face's, stalking the girlfriend of Lana Winters (Sarah Paulson). My only note there was how he fit in through an open window that small, but I'll leave that be for now.

First course: How about some electroshock therapy? Lana, damn nosy journalist that she is, was caught by Sister Jude (Jessica Lange) keeping notes (as every good journalist falsely captured and thrown in a mad house should!) and needed to be punished. Jude is worried that poor Lana's memory is really her worst enemy, and what better way to clear that than with some good ol' Frankenstein electroshock therapy? It was interesting to note-and I'm glad that Dr. Arden (James Cromwell) brought it up-that this was somewhat out of character for Jude, who we've seen is more about the power of God and prayer than science and technology. But, looking to make a point, or just worried, Jude ordered the treatment done, and if you can sit still and not squirm when Lana is strapped down and shocked the shit out of, you're a stronger person than I am.

Second course: Anybody order some exorcism hors d'oeuvres? As if Briacliff wasn't already full of enough problems, Jude now has to deal with a poor boy who was brought to her because he went crazy and started speaking in strange languages and eating animals. Yeah...time to call in more priests for an exorcism! We also got introduced to Dr. Thredson (Zachary Quinto) who is setting himself up to be a good foil to Jude, and is the court appointed psychologist in charge of deeming if Kit (Evan Peters) actually killed or those women or is telling the truth about those rascally aliens. That plot line kind of took the side step this week to the whole possessed boy, who gave another quite intense and stressful scene as the priests tried, and failed, in chasing the demon out. Don't think we've seen the last of the wily demon either, as it looked like he has now switched hosts to Sister Eunice (Lily Rabe). Rascal. 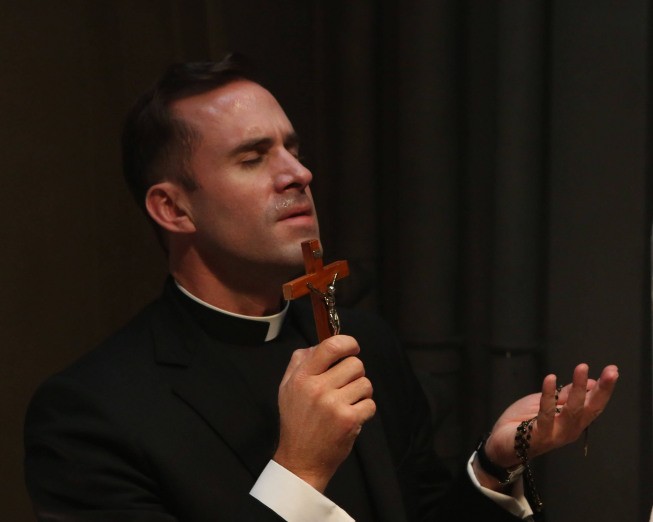 We got some of it this week when the demon was talking to Jude in the middle of the exorcist, but the one thing I want out of this season is to really dig deep down and see what makes Jude tick. Part of it is Lange killing it and stealing the show, but Jude is also one of the more interesting characters: Her piety, though cruel, seems sincere, but if the demon was telling the truth and she really is a murderer and ex-whore, that could explain her devotion to repentance and salvation. By the end of the season, if I at least get at who she is and how her mind works, I'm going to be content.

Now, that's more than enough already, but let's not forget all the other lose ends flying out in the wind: Dr. Arden apparently has a BIG fetish for girls of a certain habit, IE: nuns, and hired a prostitute to dress up in the holy smock, only for her to find pictures of dead women hidden on his dresser, bite him, then run away. (Is HE Bloody Face?). Sister Eunice is still running about feeding those things in the woods, which we apparently aren't going to find anything out about yet, Kit and Grace (Lizzie Brochere) are up to something all right, and I would be surprised it it wasn't more than just trying to escape with Lana, who doesn't trust Kit and then called security on them so they didn't get away. What. A. Bitch.

Already full? Yeah, well, don't forget your buns for dessert. Ending on a bottom, and rather odd, note, the last scene had Jude lashing Kit's dairy-air (Ladies, please, it's just a butt) while Lana and Grace got the ever-so-lovely honor of watching. All of these secondary scenes kind of jutted out of the narrative and seemed out of place and tacked to the end, and the pacing was all over the place, missing the poignancy that the earlier scenes had. Spreading that out could have done wonders, but so could limiting just how much the show is shoving down our throats. I have a feeling several of these plots are going to disappear as the show tries to figure out what is working and what isn't, but even for a show as over-the-top as "American Horror Story," sometimes less truly is more.

Willie Clark is a giant scaredy cat, and if he can watch "American Horror Story" and still sleep at night, so can you. But, you can always cuddle up with him in the dark of the night on Twitter or Facebook.