I’ve never been to Hawaii, so perhaps my falling out with this episode just comes from not being a native and just not understanding.

Don’t get me wrong:I love Butters. Butters-centric episodes are usually great, and he has had some great moments both recently and throughout the show’s history (Who can forget Butters’ very own episode or pimp Butters?). But his random anger outbursts at school were totally out of character, which yes, was kind of the point, but it just felt forced having Butters angry and screaming and yelling at everybody for no good reason. 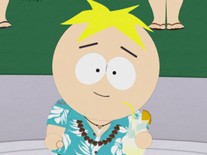 The 'twist' was quite choreographed too: Butters' parents pulled him out of school to deal with his anger issues privately and with his own kind, which turned into them sending him off to Hawaii to have his coming of age ceremony with his native Hawaiian family. And then those silly tourists tried to ruin everything, the native's special reward cards were cancelled (How else will they tell the difference between a tourist and a native?!?) and Kenny, after initially failing to pass the introduction ceremony, ended up finding a lost reserve of vodka and tropical island drinks, saving the day. Or something like that. It was pretty typical "South Park" fare, and never really amounted to anything that breakthrough or entirely memorable.

The running joke of course was that none of these people were actually native Hawaiians (and there was some infighting as well, leading to one tourist yelling at another that since they had come on a plane and not a cruise ship a few months later they had less claim to be a native), and yes, the fun play on native traditions, down to which hotels they would stay at and which restaurants they would eat at or avoid due to tourists, were all cute and whimsical connections, but nothing that's going to have you rolling in stitches or lauding the show's creativity. What was funny was pretty easy, run-of-the-mill, and didn't really at all come from Butters, which is odd, given that the whole episode was his.

There were a few soft good moments here and there: The ghost of Elvis showing up, the tourists attacking a cruise ship with golf balls, and a few one liners about Ben Affleck and "Argo" (and a quiet "Airplane" reference for those who caught it) but with Butters not really being Butters, the episode just didn’t work that well. It was quietly funny at best, and yeah, we get that tourists are annoying, but basing an entire episode around the idea, and wasting Butters on it, just felt random, out of place, and not that enjoyable. And compared to the hysterical antics that Butters usually has, it just didn’t hit the bar for what I was expecting the episode to deliver on.

But then again, if anyone wants to send me to Hawaii and learn the ways of the natives myself, I’ve always wanted to drink out of a real coconut.

What did you all think? Did it live up to what you expected from a Butters episode?

A whole episode about Hawaii and not one mention of Stitch? Poor guy doesn’t get any love, I mean come on, who doesn’t love a Hawaiian roller coaster ride? But seriously, if you want to take Willie to Hawaii, feel free to let me know on Twitter or Facebook.