Season 2 of "The Walking Dead" was hit or miss for me. Parts of it dragged on, but the last few episodes were some of the strongest in the show's run, giving us confrontations the show had been waiting a long time for (BOOM! Rick vs. Shane), getting us off the farm (SPLAT! Lots of zombies), and giving us several big series revelations (SHOCK! We're all infected).

Season 3 picked up much slower than I thought it would. We joined up with the group after the winter, and several changes were already quite apparent. Carl (Chandler Riggs) has grown up fast, Lori (Sarah Wayne Callies) is quite pregnant, Hershel (Scott Wilson) is sporting quite the beard, and everyone seemed quite adapted to Rick (Andrew Lincoln) calling the shots and taking complete control of the group.

After the ending of last season's Rick-tatorship monologue, I was a little surprised that the show gave us the end result of him taking over, but skipped showing us how him and the rest of the group got there. The stress seems to have fallen largely on his and Lori's relationship -- Lori kept trying to reach out to talk to Rick only for him to shut her down, but yet his main motivating factor still seemed to be keeping Lori and the baby safe. The rest of the group seems to have fallen completely in check. I just wish we saw more of that instead of zipping right past it.

But apparently we didn't miss much: the winter was spent running in circles and moving house to house, and the group eventually Rick stumbled upon the infamous prison. The time shift in the show is shown off in another way: the group is functioning more and more like a well-armed zombie strike team. As much as there was a lot of zombie killing, sitting safely behind fences and picking them off one by one was kind of a slow build for the show. Let's see some flash and spectacle for the season premiere, people! 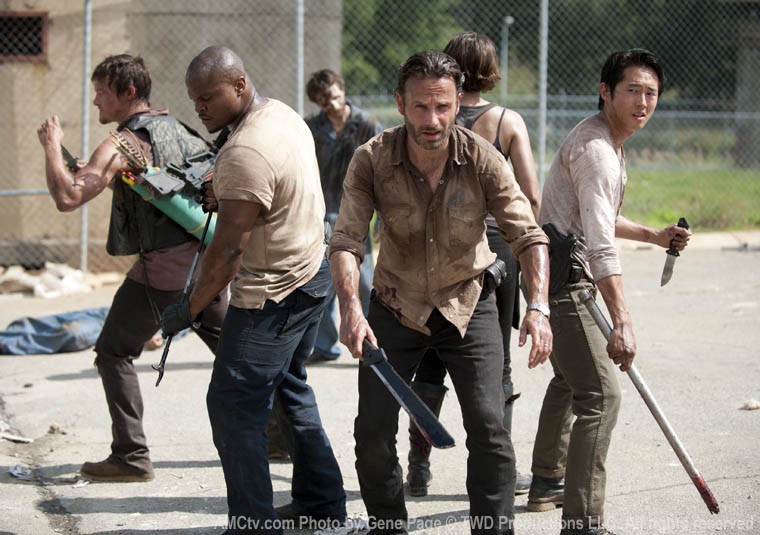 The show also has two groups to balance now, and did so very poorly. Screen time heavily leaned toward Rick and his crew, while newcomer Michonne (Danai Gurira) and Andrea (Laurie Holden) got a few (precious few, to be exact) minutes, mostly of Michonne kicking ass with her katana, but also of Andrea appearing to be dying of something. The flu? Exhaustion? It was unclear, and I was surprised we didn't see more of either of them.

The S.S. Rick continued to delve deeper into the prison, leading to a pretty bloody sequence with the group securing a cell block with some good old melee hand-to-hand combat. We even got some zombies in riot gear -- head shots wouldn't work on these guys -- which mixed things up a bit. They secured one cell block, but then went to push even further in, leading to a dark hallway runaround where Hershel literally tripped over a walker that then bit him, and Rick then (yeah, I flinched) amputated his leg in hopes of saving him. That was moments before Daryl turned around and found an on-looking group of other survivors in the prison, ending the premiere on somewhat of a mysterious note.

To me, this just didn't feel like a season premiere. It set a lot of things up: the whole "Lori's baby could come out a zombie" concept, whatever the hell is going on with Andrea, if amputating a leg will really stop the disease from spreading (but come on, peg-leg Hershel could be pretty baller; he already has the pirate beard), but it wasn't as fast and furious and, "Hey, this is the first episode of the season, let's hit the ground running" as it could have been. I'm also not a fan of the time shift: I don't like when writers skip over development and then hint back at it (which is what looks like is going to be the case here). I find it somewhat lazy as a storytelling mechanic, and I feel like I'm lost trying to figure out where everyone is now that I've been out of the loop.

But, enough from me. What did you all think? Were you happy with the premier, or did it just leave you want more? Sound off in the comments below.

Random thought: Daryl (Norman Reddus) and Carol (Melissa McBride)? Is that really going to become a thing? I got uncomfortable just seeing them try to flirt with each other.

Willie isn't always a stickler for details, but when he is, it bothers him. For example, he isn't sure how come Hershel grew a giant beard but Rick seems to keep his stunning 5 o'clock shadow. Has he been hiding a grooming kit this whole time? If these kind of things keep you up at night too, you can use that time to follow him on Twitter or Facebook.