Huzzah! No baby Marvin! With a nanny in place "How I Met Your Mother" can return to drinking beer and complaining about relationships. Right?

Wrong. With the whole gang still sticking to last season's "Don't Bother Marshall (Jason Segel) and Lily (Alyson Hannigan) unless the emergency is a 8 or higher rule," they were excited to find the new parents with a baby-free night. But, Ted (Josh Radnor) decided his and Victoria's problems weren't important enough to share, and Robin (Cobie Smulders), despite giving us a two-syllable DAMN for Smulders in a leather biker outfit, decided her problems with Nick (Michael Trucco) were equally not that important. (The irony is, neither of them really were.)

It didn't really matter anyway: Marshall and Lily only spent a few minutes out before deciding they needed alone time, then almost got hit by a cab, and spent the rest of the night making their wills in case they happened to die. In the will making process, the pair realized they couldn't agree who should be Marvin's godparent. Did somebody say plot point?

Enter Ted, Robin, and Barney (Neil Patrick Harris) ever competing for the love of Marshall and Lily. We got some good bits out of it (Barney's Bro McDonald and other various tunes were by far the best, as was his Bro-ller, down-shirt glory and all), as everyone tried to prove that they would be the best godparent for Marvin.

The only logical way to settle this? Who Wants to be a Godparent, the game show edition! 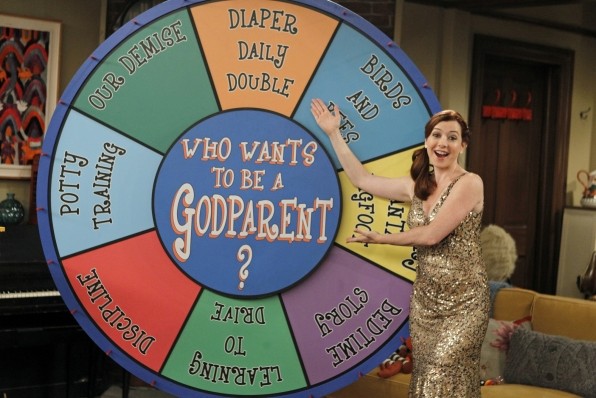 As crazy as it sounds, it was a good idea. We finally got a plot that not only was baby-centric but without the baby, but was still an "adult," "real-life/real world" (that won't last long, though) situation that parents have to go through, even if it was taken to "How I Met Your Mother" levels of extreme. From this bit we got funny anecdotal stories from everyone, but Ted's Professor Info-saurus (used to teach Marvin about sex and bullies and everything else) by far stole the dinosaur cake, and every time they brought the poor dinosaur puppet back made for another instant laugh. The game show did show how bad each of the characters will be as parents, and didn't serve anything but to set everyone up to fight about how Ted/Robin/Barney felt that Marshall/Lily weren't giving them the attention they needed as friends.

I mean, wah wah wah, cue the violin. They have a BABY, and I certainly hope that there was some meta-moments going on here, as the show is realizing that sitting around the bar going through relationship problems isn't a plot device that can work forever (if it hasn't run its course already).

At least this episode felt fresh, but as funny as it was, the ending kind of nailed the coffin for me: I just had a feeling the whole time that Marshall and Lily were going to pick EVERYBODY to be Marvin's godparents, and sure enough, that's what happened. I mean, come on now. First off, that's probably not even legal, and as much as I enjoyed the game show, why did we just waste all that time trying to make a decision if they were going to pick all three? It was a cop out. It was also the second time this season that the end-credit roll, this week the return of Barney's bro-ller ,was an avenue that seemed like it left many a possibilities unexplored.

But, I'm still loving Professor Info-saurus, so it wasn't all bad.

What did you all think? A few episodes in, how is this season tracking so far? Be sure to sound off in the comments below.

Willie Clark was a noob to the world of HIMYM until last December when he magically found the strength to marathon all six and a half seasons in a few short weeks. Now, he knows his slap bets from his ducky ties, and is in love with the bang song. He also wants that purple and blue suit Marshall wore this week. If you want to sing along, follow him on Twitter or Facebook.

TV Review tv review how I met your mother
Prev
Next