After two back-to-back strong episodes of "South Park," social commentary was high, but laughs were low this week, even to the point where pulling in Bane from Batman couldn't save the show.

Poor Ike got the whole ball rolling. As if walking in on your parents having sex wasn't bad enough, he walked in on his parents role playing, with his dad dressed up as the UPS man, you know, delivering a package. 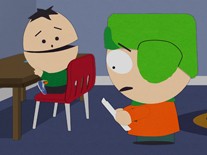 One misunderstanding, and as usual, the whole town of South Park was in an uproar. The men in town all become scared that their wives are also getting treated to special packages from the UPS man, and set out to find a way to stop him from having his way with all of their wives.

The social commentary that strung the whole thing together was provided by the old-timer farmer character (who we've seen at some points before, or at least they've used the same idea), telling everyone about how the same thing used to happen when people started getting milk delivered instead of buying it themselves. The price of shipping and the convenience of delivery, it turns out, is having the milk man, or the UPS man, have his way with your wife.

Just like last week, the show suffered from too many ideas at once. But this week it wasn't nearly as funny and the execution suffered. Ike's drawing of his mom and the UPS man having sex was kind of somewhat slightly funny the first time, but as it kept popping up over and over again it lost anything it had going for it. Cartman's whole side plot with the security system people had a few moments, but never really amounted to anything but a few tame one-liners.

And then of course there was the inclusion of the Bane masks, which all the men in town used when they kidnapped and beat up the UPS man, and there are just so many places that the show could have taken the joke, only to leave it as a one-note (OK, two if you count the ending) gag that could have been so much more. Props to the voice recreation though, as that was dead on.

Then, midstream the show jumped focus to the security company, and the In-Security alarm systems that could actually be installed in people and go off when people got worried or stressed. Again, it was a good idea, but a lackluster "taking it to the extreme" tangent for this show, especially considering where I thought they were heading for (putting an alarm on the certain specific entrance that the UPS man may have been using on their wives, for instance).

Instead we got several jokes about the In-Security device going off at the wrong time, and then the UPS man's own security device going off when Kyle tried to get him and his mom and dad to confront the truth. Of course, there was nothing really to confront, Kyle's dad cleared up how, you know, sometimes you just need to role play to bring that spark back into your love life, and life moved on. No digs at Amazon, no digs at the UPS, and the practical gold mine that is the USPS was left untouched, untapped, and sadly, the show seemed to pass up a lot of marks it should have been hitting.

I loved the idea of the premise, and the social commentary is dead on: we are a lazy generation, and there are costs associated with expecting everything delivered directly to us. And while the premise tied everything together on some levels, the execution just wasn't that funny and the show got bogged down in everything it was trying to do. The Bane gag was funny (especially with Cartman at the end) but was largely underdeveloped and seemed quite random, and the show, unlike the UPS man, failed to deliver.

Willie Clark does agree with the episode though, as he is not a stranger to packages showing up that he forgot he ordered. He also wishes that he grew up when people still delivered milk. If you want to deliver his milk, send a resume to him on Twitter or Facebook.