The Autumn of Break-ups begins

"How I Met Your Mother" is in an interesting place now, for several reasons.

The show as a whole sits in limbo as corporate cats decide its future. It's still unknown if the current season will be its last, or if it will go on to season 9. That means the creative forces putting the show together don't know when they will need to wrap it up. That's a challenge, to say the least.

The other dilemma the show faces is that viewers already know that the three main relationships: Ted (Josh Radnor) and Victoria (Ashley Williams), Barney (Neil Patrick Harris) and Quinn (Becki Newton), and Robin (Cobie Smulders) and Nick (Michael Trucco), are all set to fall apart eventually. So, the self-dubbed Autumn of Breakups begins, this week telling the disaster of Barney and Quinn. 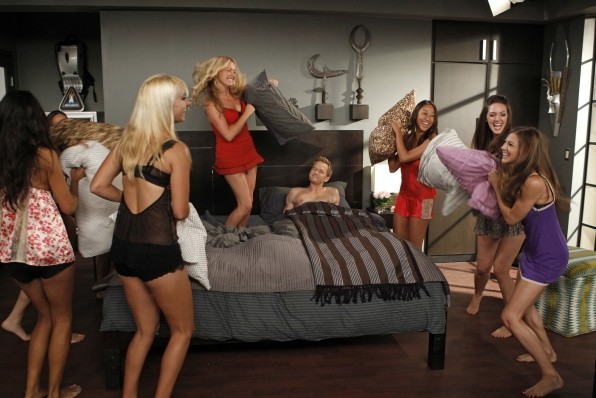 It all started with Barney's prenup, which was one of the funniest bits in a laundry list of humorous moments for the show, including such gems as mandatory good-morning pillow fights with Quinn and his other wives, a monetary fine if she gained any weight at the weekly weigh-ins, her parents only being allowed to stay in the house if they were in an urn, and the mandatory 50,000 honka-honka rule. (You know, honka-honka, the thing that no girl likes, well, except for Lily). It was all solid, classic Barney material, and fit very well with what we know and have come to expect from Mr. Stinson.

The prenup, as crazy as it was to everyone else, seemed to make perfect sense to Barney (who may only have, in his words, gone a fairy's eyelash or a unicorn whisper too far), but Ted, Marshall, and Nick all tried to convince him he was crazy.

But, after everyone got home, Barney and Quinn's prenup problems spilled over into each of the other relationships, setting up the crux of this week: Marshall, Ted, and Nick all realized there were things in each of their relationships they wanted to change as well.

The laughs just piled up as the show went on: Marshall playing football with Marvin (and then his Dad playing football with him) was a riot, leading into the best bit of the night: Nick and his hope that Robin would turn off the TV during sex, which led to the utterly hilarious Robin revelation that she gets turned on watching herself do the news during sex. So much so, in fact, that she winks during the broadcast, just so when she watches it later she can see herself winking at herself. Yeah.

Everyone then divided up on gender lines, with the ladies and Quinn storming Barney's office with a prenup of her own. As all the fights continued to escalate, the return of Marshall's old boss, Arthur (Bob Odenkirk), as Barney's lawyer, continued to bring in laughs, as Arthur not only still doesn't remember Marshall, but continued to hit on Lilly. He ended up being the voice of reason: love is trusting someone enough to say what's really bothering you, which led to saccharine resolutions of each of the couple's lingering problems.

That is, except Quinn and Barney. With neither of them being willing to compromise or negotiate at all, they both realized that they don't trust each other and called the wedding off. Pretty much just like that. Even though I don't want to see Quinn go, I thought this resolution was the weakest part of the episode. It kind of just happened like we all knew it would, without any pomp or circumstance.

On the one hand, I'm glad that the show didn't decide to stretch out all of these relationships that we know are doomed, but everything seems to be going really fast now: that was a total of three episodes from proposal to calling it off. A season or two back I would have gladly taken the speedy movement, but now that everyone is possibly up against the end of the series, there is only so much time. Perhaps the show is getting everything as much into place as it can in case this is the end.

I'm also still a little disappointed to see Quinn go. I like her and Barney together way more than I ever liked Barney and Robin, and the show is going to have to do some convincing to make me feel that's the right choice there.

The episode ended with a flash-forward to Barney talking about his and Robin's upcoming wedding, and how he wouldn't need a prenup this time. It was a sweet note to end a consistently funny episode, and any time the show balances humor, story advancement, and some good romantic notes here and there, it's a good one for me.

Moment of the night: Robin for the win. Her winking back at her TV self in pleasure after having just finished having sex. Priceless.

Willie Clark was a noob to the world of HIMYM until last December when he magically found the strength to marathon all six and a half seasons in a few short weeks. Now, he knows his slap bets from his ducky ties, and is in love with the bang song. If you want to sing along, follow him on Twitter or Facebook.

TV Review how I met your mother tv reviews
Prev
Next