What a way to kick off the back half of South Park's 16th season. 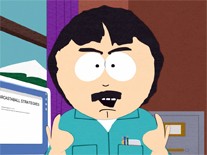 I'll admit I was a little worried. The preview had it all set up to be about football, and frankly, there are few things in life I know less about than professional sports. But, "South Park"'s previous entries into the sporting world, including one of my favorite episodes, the baseball classic "The Losing Edge" from Season 9, have still been enjoyable for a non-sports person like myself. This episode was no different.

The episode started off with South Park Elementary getting rid of kick-offs for the football team, which infuriated Randy. At the next PTA meeting Randy suggested that they might as well just make a sport where all the boys wear tin hats and bras and are nice to each other and hug and play with balloons.

Of course, the school thinks this is a great idea, and Sarcastaball is born. The craze soon sweeps the state, with Randy becoming the new head coach for the Denver Broncos Sarcastaball team. Seeing both the boys and the NFL teams dressed up in tin hats and bras and running around was quite the sight gag, especially as Randy continued to be more and more sarcastic about how happy he was that the country was starting to remove violence from football.

I got the point of the sarcasm bit, at least on some levels, but it would probably work better for someone more versed in the NFL. Is everyone in football really that sarcastic? Are they really in that much denial that football can cause head trauma? (Interestingly enough, I was in the U of R's recent football head-injury study as a non-football-playing control). It wasn't until the end of the episode, when Randy and his doctor exchanged, sarcastically, that putting money that should be used to research real diseases into researching something that people chose to do to themselves is a good idea that the real point of the whole thing came out, and even then it seemed like a lot of build up to a no-brainer conclusion that didn't really come down all that hard on anybody. (But maybe that was the point, we are talking concussions here after all.)

Luckily, Matt Stone and Trey Parker had a real comedic ace in the hole. Which of the kids, who would probably normally suck at sports, would excel in a game all based on being nice and hugging ?

Butters. Butters tends to steal episodes, and this was no exception, with most of the laughs and shock humor coming from the loveable (and clueless) straight man himself. Butters becomes the star of the South Park Sarcastaball team, inspiring his fellow students with speeches about finding that gooey and happy place inside of yourself and sharing it with others in a nice and positive way and using it to get to victory.

And while the sarcasm and football commentary droned on, it was Butters' and his creamy goo that saved the day, and gave the episode it's best (or perhaps worst) moments. See, the happy nice center that Butters was talking about was none other than the 'happy goo' that was escaping from his body at night during 'happy dreams,' and even if you did see that joke well, coming, just how far the show took it was a mix of gross-out humor and comedic gold. From Butters opening his closest to a whole collection of cum containers that he had been saving, to Cartman then eating it to try to get better at Sarcastaball, to the fake energy drink ad (filled with everything an athlete needs: Commitment, Compassion, and Camaraderie!), it was hilarious, classic "South Park." What other show is going to start with football and end up at a whole bunch of people eating spunk?

Of course, only innocent, naive little Butters could pull this off, not understanding that his warm happy goo he is selling everyone is really semen, but that's part of the gag. When Randy tried to get Stan to stop playing Sarcastaball before his brain got stuck being sarcastic, the boys explained to Randy that they aren't actually being sarcastic and actually enjoyed playing a nice, fun game that isn't about hitting and destroying each other -- an idea that the adults couldn't seem to fathom. The boys tried to get Randy to cheer up by offering him Butters' goo, which he swallowed down, before finally revealing to everyone what they'd been drinking cum the whole time (nobody else knew what it tasted like, apparently?)

Not that continuity counts for much in South Park, but didn't all the boys learn about semen quite awhile ago when Catman became god of the seapeople? One of them must have realized what Butters was giving them to drink was really semen.