Oh, "How I Met Your Mother," how you are an eternal heart tease.

During the kick off to the show's eighth season, fans were treated with the closest glimpse of the mother we've ever seen, and the show finally has her and Ted (Josh Radnor) inches away from meeting after all this time. 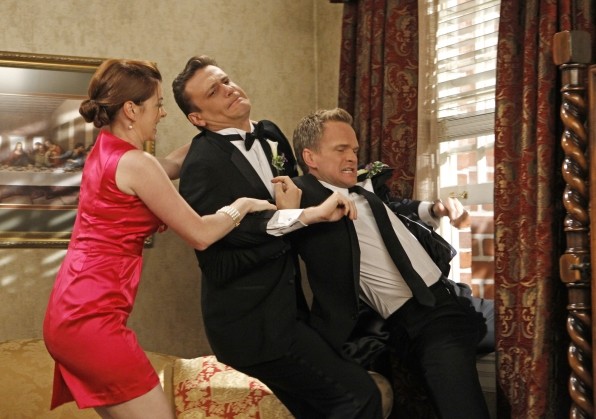 But, as Ted would say, I'm getting ahead of myself.

Season 7 ended with two shocking revelations: first, that Barney (Neil Patrick Harris) and Quinn's (Becki Newton) just-announced engagement wouldn't work, and second, with Ted and Victoria reuniting and driving off into the sunset.

I can't be the only one who was taken aback. I hate, hate, h-a-t-e even the smell of the whiff of the chance of the idea of Ted and Victoria (Ashley Williams) ending up together, and bringing her back for a second time seemed too much. And, I was a huge fan of Barney and Quinn, the power-duo made in stripper hell. We've been down Barney-Robin (Cobie Smulders) Candyland before, and it didn't work.

This week picked up right where we left everybody, with Ted recounting to Robin (who, like Barney, was freaking out about the wedding) the story of how he had to climb in and out of that very room when he ran away with Victoria.

Meanwhile, Marshall (Jason Segel), Lily (Alyson Hannigan), Barney, Robin, and Quinn were all celebrating Barney and Quinn's new engagement, with Marshall and Lily suffering heavily from being-too-tired baby syndrome. While babies tend to swoop in and ruin sitcoms, at least this was a different way of having the baby's presence known without him being around all the time. But it was a (wait for it...) tiresome joke to begin with, and a waste of both characters.

It was the duo's tiredness that kept things moving, though. They accidentally revealed to Quinn that Barney and Robin used to date (something he hadn't told her, leading to his funny retelling of the whole show up to this point in 60 seconds), forcing Robin to swoop in and prove she wasn't really that much kind-of-but-mostly-not-really into Barney anymore. Barney, after telling Robin that he had erased every picture and piece of evidence that they dated, gave Robin a key to a storage locker where he had all the memories of them saved and boxed away. It was a sweet moment and a gesture from someone about to marry another woman.

Back with Ted, he ran into Klaus (Thomas Lennon) who he found, ironically, also running away from Victoria and the wedding. In a saccharine moment, Klaus explained how Victoria was special but wasn't that special person (the moment nearly lost beneath the attempts at German-language jokes, mind you) while flashing to both the Erikson family and Barney and Robin both still thinking about each other.

And then of course, the big moment! We finally know exactly where Ted meets his wife-to-be, at Farhampton, when it's raining, and we saw her legs walk out of the cab, before the scene panned out with her yellow umbrella still covering her face. It's a little sad that that one moment had me more excited than probably the whole episode did. But that just goes to show the power of keeping something from someone for so long.

But, this week managed to do what it needed to do. With it still unclear if this will be the show's last season, the writers have gotten Ted and the mother in the same place exactly where they need them so they can pull the trump card out at any moment. And we still don't know if Barney or Robin actually finish the wedding, as Ted did point out he was coming back from a pretty horrible wedding. Time will tell, time will tell. At least we're getting closer.

Oh, and also worth noting, the first soundtrack for the show, "How I Met Your Music," hit iTunes yesterday to coincide with the premiere and has some real gems on it. Check it.

Willie Clark was a noob to the world of HIMYM until last December when he magically found the strength to marathon all six and a half seasons in a few short weeks. Now, he knows his slap bets from his ducky ties, and is in love with the bang song. If you want to sing along, follow him on Twitter or Facebook.