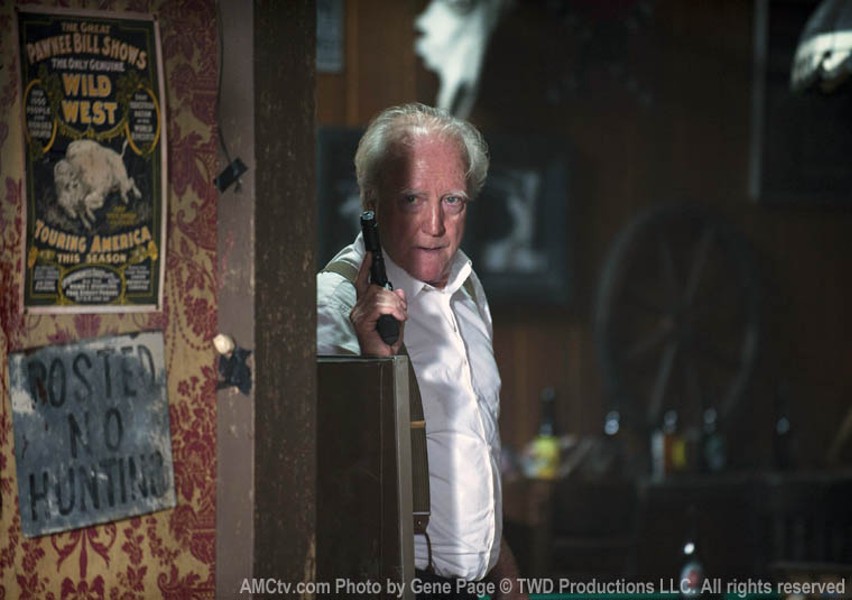 And just when you think a show can’t shock you, “The Walking Dead” returned with some much needed gusto. The two situations from last week that had run dry really pulled through, creating some down right awesome moments for the show.

Kicking things off, Lori’s (Sarah Wayne Callies) escape from her car crash scene was well worth her stupidity in running off alone. She kicked some major ass, taking down two walkers (for the double kill), one with an amazing hubcap to the face. She’s always the one being protected and hasn’t gotten to do much leg work herself, but she really stepped things up.

The bar scene culmination was also quite well done. Turned out that the people Rick (Andrew Lincoln) shot last week had friends close by, and in proper Wild West tradition Rick and company had to shoot themselves out. Hershel (Scott Wilson)even had to take arms, and had some real character defining moments; most importantly in standing and watching a man he just shot get eaten by walkers. It was gory, but also seemed to have completed Hershel’s transformation: I’m pretty sure this is the first time he’s called them walkers, and the first time he’s been ready to kill one if necessary.

The shootout led to a sharp shooter from the other group trying to jump to safety and landing square on an iron fence post. Rick, still not ready to shed his save-everybody mentality, convinced Hershel to try to amputate instead of leaving the man for dead, but ultimately Rick pulled the newcomer’s leg right out of the iron fence and if that didn’t make you wince, nothing on TV will. Eck.

The show just didn’t keep up the momentum though. The Shane(Jon Bernthal) and Rick baby-daddy’s soap opera hour pretty much dominated the back half, with a few other menial interactions. Glen (Steven Yeun) started to push Maggie (Lauren Cohan) away because he felt he was getting too selfish in his fear of her losing him, Beth (Emily Kinney) is still catatonic but I really don’t care, and Daryl(Norman Reedus) is back to his walker-ear necklace days. Actually, him telling off Carol (Melissa McBride) was very uncomfortably well done; I was a little shocked how far he went, and it will be interesting to see if their close-nit relationship can weather Sophia (Madison Lintz) being gone.

But, the baby daddy drama set up here is what I’m most interesting in. Lori is starting to turn; I mean really turn, Rick against Shane. As if it isn’t bad enough that Shane porked his woman while he was gone, now she fed Rick her fears that Shane would go to any lengths to protect a baby that he is convinced is his. Rick’s coolness with the whole Shane/Lori situation has surprised me(granted there have been more important things going on), but it’s only human to be jealous, and I can’t imagine Rick is going to let Shane move in on Lori much longer. I don’t see a scenario where the baby isn’t Shane’s, but Lori told Rick that either way they were going to act like it wasn’t. Like I said, baby drama, but I think that it is going to be the focal point that the reset of the group circles, or falls apart, around.

Two alpha-dogs like Rick and Shane cannot keep butting heads forever, and while it made for good conflict for a while, someone has to give. Shane, given he has already outlived his comic book character, seems the most likely to head off or be killed. I could see Andrea and Daryl following him, but Dale (Jeffrey DeMunn) getting fed up and capping Shane would be oh-too-sweet if you ask me.

Either way, the start of the episode really had some strong and grisly moments, but the rest of it felt like masonry for future episodes. Fort Benning isn’t a heading anymore and Sophia is dead, so the two main driving forces for the group are gone, leaving them without a real sense of direction. Hopefully it’s a direction away from the farm at least.

What did you all think of this week’s episode? We finally got more action, but was it enough or has season two failed to impress so far? Sound off in the comments below.