Though England's Ben Eine had to back out of participation this year, he has told Wall\Therapy organizers that he intends to visit and paint a mural in Rochester in the future. Everyone involved wishes him the best.

Sunday's block party was a beautiful gathering of Rochesterians, who witnessed a lot of progress on the paintings along Pennsylvania Avenue. New York City artist Cern joined the group there with a whimsical work, and also made balloon animal creations that complemented his mural. Live music in the evening was provided by Thunder Body, who kept the crowd dancing, and Mikaela Davis, who will create an original score for the documentary film being made about this project.

HowNosm finished their strikingly intricate work in fewer than 24 hours on Saturday. Rumor has it that the duo will paint a bonus piece before the artists depart early this week.

DALeast's wall is covered in his characteristic winding tangle of black lines, form taking shape into what will be a great blue whale. Faith47 created a beautiful golden lioness, crouching up above the Union Street Bakery, which includes the words, "I am she whom drives the jackals from you while you sleep."

Liqen's linework includes a massive eagle bound up in barbed wire and padlocks, with surveillance cameras pointed at it. Already I've heard nervous murmurings among the public about whether or not the piece will get buffed out due to its content. There has been no official plan to remove the mural, but the reality behind the concerns is disheartening, considering some Americans' historic defensiveness over "offensive" art. Artists have the potential to jolt us out of the sometimes single version of reality in which we dwell. It can provide insight into the true complexity of the world, which is often painful and confusing. When we are startled from a comfortable pedestal, we may balk and shift into denial.

Intelligent, open people will move through that stage and ask questions and engage with the work. Fearful people call for the removal of works that upset them, but I ask you, readers, to be very critical of those who are fearful of such a subject as the one Liqen presents to us. Even if you disagree with the message in a work of art, let it become the forum for discussion. It is ironic that an artwork about surveillance and control would potentially be censored.

Case made major progress on his piece, which is shaping up into a swimmer clinging to a diving mermaid. The photo-real element of his work is coming through already in the colorful scales and faces.

Mr. Prvrt is putting finishing touches on his eerie owls peering from dark-painted bricked-up windows. His sharp stencil work is getting ethereal detailing, enhancing the already mythic effect of the creatures. 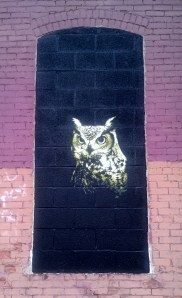 Thievin' Stephen's backgrounds are finished and today he's putting in the first layers of stencils, but so far he's keeping the twin-figure design he's created for the double garage doors a secret. Saint Monci completed some initial geometric patterning yesterday.

An updated map of mural locations was posted yesterday by "Wall\Therapy"; check it out here.