Not quite the wrenching follow up to last week’s killer episode, but “The Walking Dead” took a much slower, though somewhat overdue, look at the constantly strained relationships within the group. 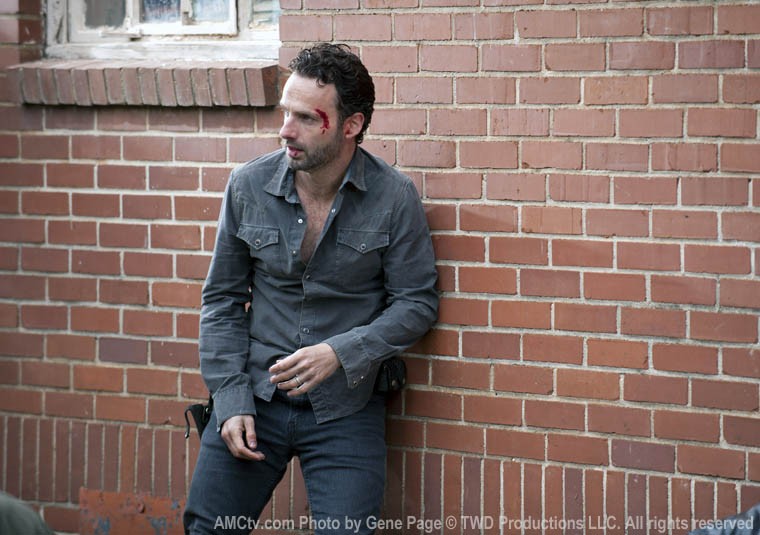 Front and center was Rick (Andrew Lincoln) and Shane(Jon Bernthal), who’sh ead-butting finally led to them throwing fisticuffs. I’ve always wondered how Rick was able to stomach keeping Shane around, giving the whole him-sleeping-with-his-wife deal, and the two have had tensions bubbling to the surface forever now. With everything going on though, there hasn’t been much time for some man-to-man conservation. Rick finally laid down the law with Shane, and I was quite shocked to see Shane, at least at first, heel-toe it in line behind Rick.

The best part was when Shane reverted to his fears when he left Rick in the hospital, of the soldiers coming and shooting humans, and how afraid he was and how it was Lori (Sarah Wayne Callies) who kept him alive. It was a moment of emotional truth hiding behind his tough man ego, and Rick simply brushed it off.

But, the baby gloves came off and the fight broke out as the pair tried to find a place to drop off the survivor of the other group from last week. Turned out that the kid knew Maggie(Lauren Cohan), and the whole plan of hoping he wouldn’t know where the farm was backfired. Shane wanted to kill him then and there, Rick didn’t, and boom. WWE cage match, Walking Dead style.

Rick ‘won,’ but not before Shane chucked a pipe wrench at him. He narrowly missed, but attracted a horde of walkers. Each man fought for his own life, (Rick shot a walker using another walker’s mouth as an aiming device, which was awesome), and I was impressed when Rick took off, leaving Shane trapped in a school bus. I thought it was fitting: What better way for Rick to show Shane that he had balls and could make the tough decisions than leaving Shane behind?

The Rick/Shane relationship is perhaps the most interesting in the show, and while it is often overplayed, it tends to be for the wrong reasons. This moment was a return to two partners who had the world go to shit around them, and who know deep down they are stronger together then apart. For better or for worse, Rick saw two police corpses as he left, and returned for Shane.

What stands to be seen is how Shane will come out of all of this. Rick put his foot, and his fists, down hard, but Shane isn’t one to easily buckle. He’s keeping his mouth shut for now, but I don’t think he’ll be able to play second fiddle for long. I also have no idea why he kept staring at a walker dancing in a field at two different points, but if it was imagery it was lost on me.

Back at the farm, it was the women’s time to bicker and squabble about laundry.

I’m serious. Lori and Andrea(Laurie Holden) had a cat fight that seemed somewhat forced, and like an attempt to have two strong females stand as foils to Rick and Shane. Wasn’t really working, especially when it seemed to come down to Andrea being jealous Lori had been with Shane.

There was slightly more to it than that, with Andrea sticking up for Beth’s (Emily Kinney) attempt to try to commit suicide.I know I knocked Beth last week, mostly because I felt like the show was trying to make me care for her before I really did. This week, however, she finally awoke, and played an important role in highlighting the very real gravity of the world these characters are stuck in.

Not that the show shies away from the darker side of this world, but I actually think Beth’s arguments, and to a similar extent the echoes back to Andrea last season, are worth at least noting. These people are fighting, but what are they fighting for? Not everyone can be the eternal optimist, and it just adds a sense of reality and humanity to the show to have the other side of the coin presented.

The deeper connections this week came at a cost though: the rest of the characters weren’t seen at all. It was much slower, and did suffer from dialogue that bordered a little on campy (Rick and Shane must have used the word ‘anymore’ ten times in the first two minutes), but it worked, and it was the start of character interactions I’ve been waiting some time for. I don’t think we’ve seen the culmination of heavyweight battle Rich vs. Shane or Lori vs. Andrea yet, but all in all this week still worked.