There’s usually at least one low point in every “South Park” run, and this week just didn’t do it for me.

It was a great concept, and a pretty funny idea, but it just seemed the longer the episode went on the more it got caught up in itself and stopped being funny. Add to the fact that it felt like several other out of this world warfare plots, and you end up with perhaps the most lackluster episode we’ve seen this half a season.

Thanksgiving was the theme of the day: The show started with a Native American guest speaker in class. He assigned a report that all the kids had to do on the truth behind Thanksgiving. Cartman, lazy as always, insisted that they could learn just as much about Thanksgiving if they watched the History Channel instead of reading.

The History Channel ended up being the butt of most of the jokes, and it starts off pretty spot on. From mocking the channel’s oversensationalism and sometimes laughable incredible use of ‘credible’ historians, it was off to a good start. The professor of DeVry University joke was well done, even if it was somewhat run into the ground.

And it was funny, but the laughs were very top loaded, and the episode just spiraled out of control from there. Kyle accidently predicted that aliens were involved with Thanksgiving, and that both the Pilgrims and the Indians were alien races that met on Earth to make a peace treaty that up until now was keeping intergalactic peace. Now, with the leader of the Pilgrims sucked to earth through a wormhole, the Indians were free to attack the stuffing mines. 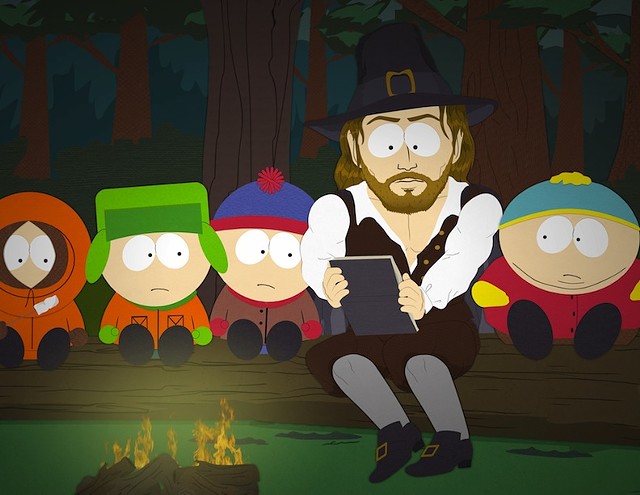 Weird? Yeah. It was, and it just kept going and going, without ever really hitting any high point or bringing in any more laughs. It drew in some other targets, including “Thor,” but like, did anybody really go see that movie? I understand the History Channel spoofs, but I was under the impression Thor made enough of a mockery of itself. The Natalie Portman ‘wormhole’ bit was somewhat entertaining, at best.

Especially with the timing of the episode, the latter half of it just seemed off kilter. Several times the show pointed out that Thanksgiving was still a few weeks away, which only further honed the point that it seemed a little early. Was there really nothing else more newsworthy or time sensitive for SP to piss on this week? I mean, “Thor” and Natalie Portman? I know you can do better than this, and you’ve been doing it for most of this part of the season.

But, it just seemed like a good idea that was undercooked. I liked the whole Pilgrims and Indians planet worlds they built up, but it felt all too familiar even as crazy as it was. It wasn’t as funny as the Go God Go saga, and it even echoed back to the Pinewood Derby episode. Now, if they had brought back everybody’s favorite Thanksgiving character, a certain Mr. Starvin Marvin, then I think I could have really gotten behind this episode, and he would have fit the alien theme to boot.

Anyways, if this is the low point for the back half of the season, I’ll take it. I just hope Matt Stone and Trey Parker are back with something a little more relevnet and pointed next week.