Usually the one throwing the insults, this week was a giant blow against the overweight and rabble rousing force behind many of South Park’s more extreme moments.

And, in true SP charm, it came with a take on the Occupy Wall Street movement that was spot on genius. See, all the students in South Park Elementary took the Presidential Fitness Test, but apparently one student was so fat and out of shape that he made the school’s scores the lowest in the nation. Who else would have connected current politics with those dumb high school p.e. tests we all had to go through? I really enjoyed how they played with the idea-it’s nice when we are reminded the boys are just 4thgraders after all.

The students, led by Butters and Jimmy, decided that they, all being in the 99% that passed the test, shouldn’t be held accountable for Cartman’s 1% pulling them down. Off to the Fitness Test offices they headed, in hopes of appealing the scoring decision.

Occupy Red Robin soon commenced, in what is some of the best commentary on the whole movement that I’ve seen. It was spot on, and hilarious, including the police taking up blocks of streets(and including a Bon Jovi concert for the overworked officers) and the media reporting on it like there was no tomorrow. Even Michael Moore made an outrageous appearance, which was worth it for the sight gag if nothing else (and he was quite a sight.) 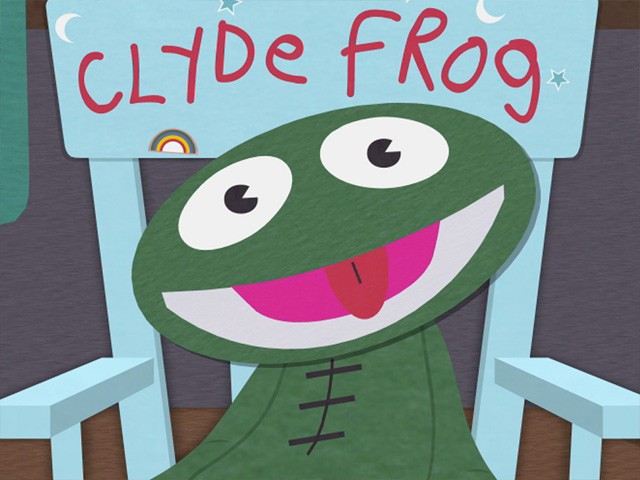 Cartman, soft skinned as always, turned to his lovely stuffed animals for support after all the kids started ripping into him. We saw the return of Clyde Frog (SP is sure bringing in a lot of older references this half of the season, but I’m liking it), Polly Prissy Pants, and even Peter Panda(got to love the pun).

In what seems to be revenge for him bringing the scores down, one by one, his beloved stuffed animals are met with disastrous fates. He ends up hiding in shelter at Tolkien’s, after the realization that he is getting blamed for a test that was unfairly made by President Obama. In his head this rationalizes out that all black people are immune from any criticism, and while he made that point several times it was still pretty spot on given the political movement discussions of late.

As the episode reached the end it did begin to lose sight. The protesters (who by now had erupted into ‘class warfare’ between the 5th graders and 4th graders, ending with some funny percentage jokes) were much funnier then Cartman’s plot line, and I hate to say it, but I called it that Cartman was really the one killing off all his stuffed animals.

There wasn’t really any point there, Kyle simple noted that Cartman finally killed all his play toys after the rest of the kids made fun of him and told him to grow up. It just was too predictable: Few characters on the show are brave enough to fuck with Cartman, and it even echoed Mr. Garrison’s self-sabotage of Mr. Twig eons ago.

The way the ending was set up it did feel like it was parodying somemovie or another that I just couldn’t place, so that may have to do with my disconnect.Happens sometimes.

Ending aside, South Park has continued its good streak, and managed to give a fair shit on current politics while at it. I’d put it ahead of last week’s Broadway spectacle, but it’s still trailing behind my season favorite Lemmiwinks adventure. But, what do you all think? Did the ending work for any of you? (Did anybody catch the reference I missed?) And what are your thoughts on this half of the season so far?