Who couldn't use a little more of both?

Nothing is sacred when it comes to South Park.

And leave it to creators Matt Stone and Trey Parker to keep it that way. Anybodyworriedthat newfound Broadway fame and a stunning nine Tonys would go to their heads, can rest assured. This week the duo, with help from “Book of Mormon” composer Robert Lopez, took aim at the magical world of musicals.

It all started with Randy deciding to take Sharon to one after hearing that “Wicked” will put her in the mood for an afterwards melodic mouth treat. It turns out that the play, and all of the ones on Broadway actually, have something called subtext. Women don’t know it, but they are being bombarded by subliminal messages that they really, really want to suck some dick after each show.

It’s not bad parody here, given that Matt and Trey did somewhat of the same thing: Challenging the Broadway elite as newcomers. But it was a tad predictable, especially given Randy’s ol’ fashioned episode last season, that the story was mostly going to be sex-related, and the ‘bro’ jokes got a little tired.

The Broadway show parodies themselves weren’t really that funny either, with a few laughs here when the true subtext of the shows would come out. The humor relied more on situational and plot than anything else, but it just fell short of being as laugh out loud funny as last week was. 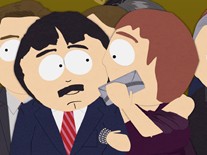 The side story took a little bit more of a back burner than usual, revolving around Stan and his sister, Shelly, having to deal with the vegan family in town while their parents are off oralsexcapading. Shelly falls for the boy and then those two decided to go see a musical.

If “The Book of Mormon” wasn’t as awesome as I keep hearing it is, I wouldn’t let shit like that slide. But hey, who can really blame them?

By recent SP standards, this week was at least two blow jobs way up, but all in all for the show, it could have been a little more poignant. But, if this marks the low bar for this run, it’s still higher than we’ve seen the show in a while.

But, then again, maybe I just need to get out to Broadway a little more often.