Phoenix, Arizona-based artist Lucinda Yrene (aka La Morena) worked through the vacillating heat and rain showers last week to create her mural on a long, low wall at 1112 East Main Street (across Main from The Hungerford). The mural doesn't face the street; it's on the east side of the building facing Minges Alley, but the space created by a grass lot in front of the wall makes the work visible to cars and pedestrians approaching from downtown as you lumber down the hill.

First you peep the deep purple of the mural's velvety sky and hot-hued geometric patterned border, and then like a beacon, a giant snowy owl appears. On the left side of the long painting, a young girl in profile faces right, her face kissed by the full moon as she holds out a bundle of dried sage, smudging the air.

Yrene calls the mural "Pasado, Presente, Futuro" — past, present, future — and the girl in the painting is her daughter.

"She's basically following in my footsteps. I do natural healing," she says. "The sage is cleansing, not just for the space here; we all need it — me, the nation, everyone. People have been coming up and asking what it represents, and they all know what it means. It's a good feeling to know that."

Milky smoke unfurls from the bundled herb and drifts across a space specked with pinpoint stars, back to the owl that's winging toward the girl. She's framed on the left by a big-leafed sage plant, and the whole scene is framed by crescent moons on either side and the bright border along the bottom.

The last bit is a shout out to her heritage. "I decided to put the border in this mural because I am Apache, Pima, and Chicana, and wanted to add a little bit of my culture," Yrene says.

It's a great spot to put a thing of beauty and positivity. The adjacent GP4H neighborhood (named for Garson, Peck, Fourth, and Hayward streets) has a number of condemned properties and vacant lots.

The area is a hybrid — the immediate vicinity of the freshly renovated Rochester Public Market has been undergoing changes these past several years, with added upscale living, art spaces, trendy eateries. So far this change is mostly centered on Railroad Avenue, which is beginning to look and feel like Brooklyn's Bushwick. At the same time, neighboring Marketview Heights has experienced a revitalization from the inside that's made homeowners out of tenants, and the area is filled with community gardens.

GP4H arguably needs some love. But all over the country, Rochester included, attention by developers has a tendency to price people out of their homes and businesses. Street art has an undeniable connection to development and gentrification, but Yrene is neither the face of gentrification, nor an advocate for it. Her next mural project -- to go up this fall in south Phoenix where she grew up -- will be in an area where development is happening due to the expanded light rail. She says there's a group of people trying to ensure that local businesses don't get pushed out by Starbucks and Jimmy John's chains, and that the spirit of her mural is one of protection.

Phoenix-based muralist @lucinda_yrene works with her mentee @tiers_yeux last week on her @walltherapyny mural. The piece is now complete at 1112 East Main Street.

So far Yrene's new mural has been well-received. Along with messages regarding the piece from women — thanking her for being spiritual and representing motherhood — as she was painting, folks from the neighborhood approached her in curiosity to inquire about the painting and its meaning.

And many people have recognized the sage as a cleansing tool, she says.

"At first I wanted it to be a little bit political, because I do a little of both," Yrene says. "I paint about immigration, feminism, community. But I thought I'd go from the heart on this one and be a little more spiritual. Because it doesn't matter what culture you're from, or what race you belong to, we all need a little healing in our lives."

The owl symbolizes a special connection Yrene, and now her daughter, have to the animal.

"To me it's a good omen, I see owls as messengers," she says. "Since I was a kid as young as my daughter, I started seeing white owls. A couple of weeks ago my daughter and I were out driving, and there was a white owl that was flying with us long enough that I woke her up to see it. She's at the same age that I was when I saw my first owl outside of my grandmother's house." 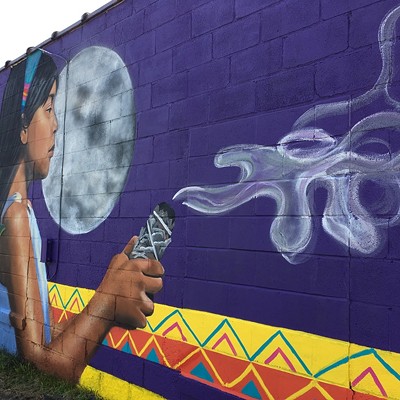 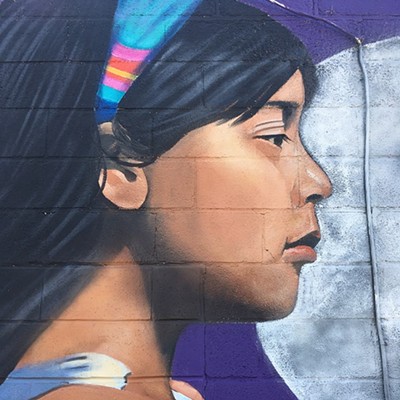 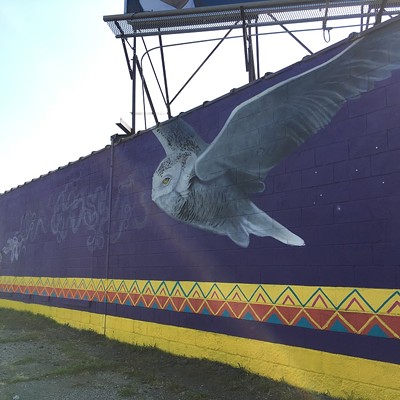 In 2012, Yrene began curating underground and pop-up shows in Arizona. "I didn't know how to get my foot in the door, and that's how I met a lot of artists. But it wasn't until 2015 that I started facilitating mural projects. That's how I met some artists from Just Seeds," including fellow WALL\THERAPY muralist Jess X Snow.

Yrene has also collaborated on mural projects with artist Mata Ruda, but for the past few months she has been creating solo murals. "Pasado, Presente, Futuro" is her largest solo mural.

In addition to WALL\THERAPY volunteers, Yrene was assisted by her mural-making mentee, 19-year-old Hector Castellanos, who lives about an hour from Phoenix in Casa Grande.

"He's been a fan of me and Mata Ruda for about a year and a half, and he's just starting out in art," Yrene says. "His parents are migrants from Honduras, and so they live in this barrio. He sees it as a hard life, and he's just trying to get out and do something. He's inspired by art."

Castellanos reached out to ask Yrene about six months ago, asking her to mentor him, she says, and he was persistent.

"I've been working with him for the past four months, and he drives all the way out from Casa Grande, she says. "I thought it would be good for him to come here with me so that he can see the potential of where he can go with his art, if he works hard for it. He's very intelligent, and is like a sponge, soaks up all the information."

EDITOR'S NOTE: The author lives in the GP4H neighborhood.