Although WALL\THERAPY organizers set a theme of arts and activism for this year's festival, they left the specifics up to the individual artists. Todd Stahl, a teacher at Webster Thomas High School, began working Sunday at 59 Pennsylvania Avenue, assisted by a few of his students. His mural features an oversize portrait of a young Syrian girl amid loads of symbolism and patterns that are characteristic of his work.

"I wanted to focus this year on Syrian refugee children," Stahl says. He's been following the civil war and refugee crisis, but not very closely until recently. "I had heard about the atrocities that were happening, but because there's so much happening in America, I didn't really focus on it," he says. "It's so far away. My wife and I love to watch documentaries, and we happened upon one on Frontline called 'Children of Syria.' It follows this family with three kids of varying ages, from high school down to five, and a husband and wife."

Despite the exodus, the family stayed in the city because the father began working with a group of resistance fighters. The kids homeschooled themselves. And walking around the city is a gambit -- there are snipers in the buildings.

"It was really eye-opening," Stahl says. "I have a 6-year-old and a 9-year-old. Our lives are so comfortable, even on days when we think, 'Oh, life is hard.' I don't have to worry about snipers. Their city was in shambles."

Stahl's mural was specifically inspired by a scene in the documentary when the children -- the family having finally escaped the city -- encounter the sea for the first time. Their sense of freedom and relief was amazing, Stahl says. "I live close to Lake Ontario and drive by it all of the time -- you take it for granted."

Central to his mural is a larger-than-life portrait of a Syrian girl, who is surrounded by a barren landscape, but pulling the tide of the ocean up close to her heart, like something precious.

The reference photographs for Stahl's piece are sourced with permission from a Syrian documentary photographer named Manar Bilal, who was excited about Stahl's project.

Off to the right of the girl, the sky is filled with silhouettes of World War II era bombers -- chosen because they are such an iconic war plane -- transforming into birds, like an M. C. Escher tessellation.

It wouldn't be a Todd Stahl piece without text. A sign behind the girl points to Damascus in one direction and Baghdad in the other, both city names appearing in blocky English characters and flowing Arabic script. Bold red and white diagonal stripes allude to "caution" signs as well as the American flag and our decades-long presence in the Middle East.

While wall hunting with the WALL\THERAPY team, Stahl's mural location changed a few times before the current spot was agreed upon. He's painting on two garage doors, one of which have the wooden-assemblage look of much of Stahl's studio work. The left door features a giant hand throwing a peace sign and painted barbed wire snakes across the surface, which has one or two broken windows. These were left unrepaired, as they subtly reference the broken-down infrastructure of war-torn cities.

Stahl will continue to work on his mural throughout the week. See the slideshow below for some visuals, and follow us on Instagram @roccitynews for more pictures and videos. 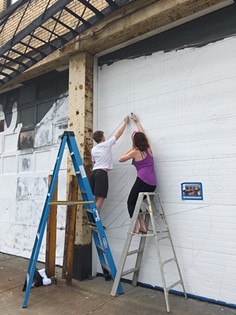 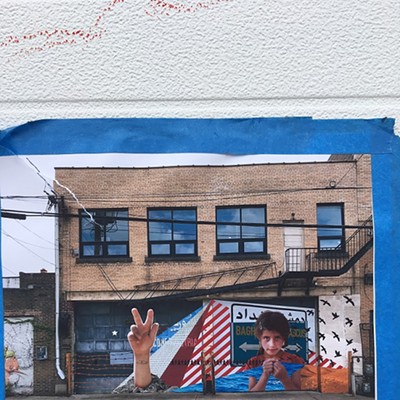 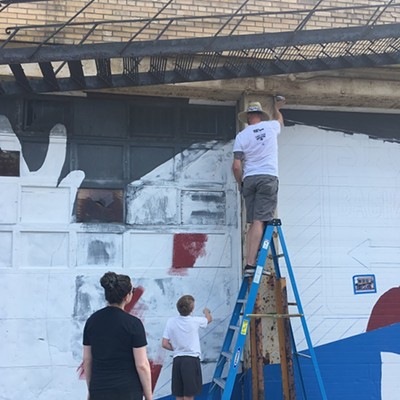 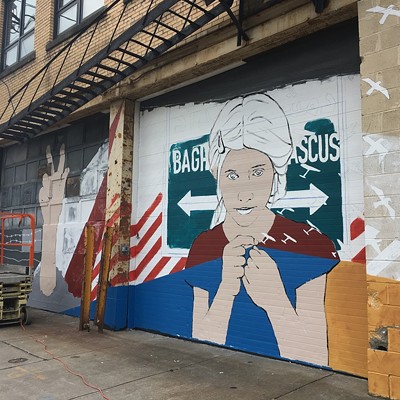 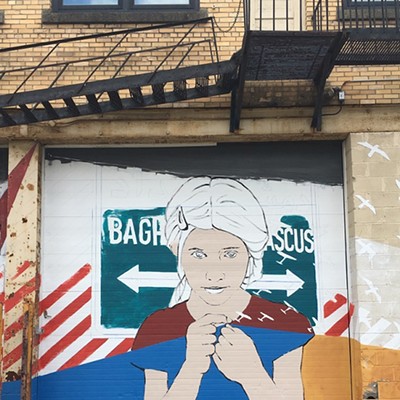 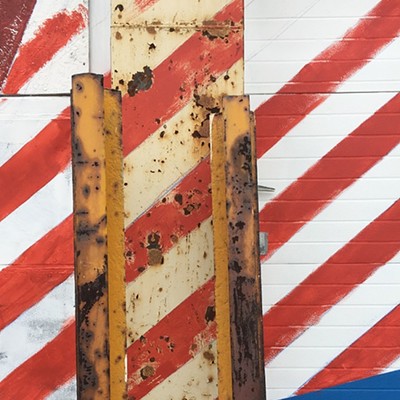