WALL\THERAPY 2017: Notes from the weekend

WALL\THERAPY over the weekend announced its 2017 mural locations, which span a swath of Rochester on both sides of the river.

A brief recap of the weekend's progress follows, and stay tuned for individual artist spotlights and interviews coming this week. See the slideshow below for some visuals, and follow CITY on Instagram @roccitynews for more pictures and videos.

This is a female-centric year for WALL\THERAPY. Seven of the 10 muralists are women, and every mural that has been started so far features women.

SARAH C RUTHERFORDhas made quite a dent in the work on her massive mural at 548 West Main Street, which features a woman holding a small child, surrounded by Art Nouveau flourishes and colorful flora and fauna. In addition to joining WALL\THERAPY's lineup this year, Rutherford's mural is part of her series, "Her Voice Carries."

LUCINDA YRENE (aka La Morena)began work Sunday on her wall at 1112 East Main Street, on the west side of Minges Alley. The painting includes a portrait of her daughter holding a sage smudge stick, and an owl floating aloft.

AUBREY ROEMER, working on a huge wall at 936 Exchange Street, is creating a vibrant, mixed-media painting featuring a central woman holding a child, with three figures in the background, all surrounded by vibrant plant-life.

TODD STAHL also began working Sunday at 59 Pennsylvania Avenue, next to Thievin' Stephen's "Stock Lives" mural. A teacher at Webster Thomas High School, Stahl has six students assisting him this week. His mural, featuring a young Syrian girl amid loads of symbolism and patterns, is inspired by international politics and the refugee crisis.

JESS X SNOWworked into the wee hours of Monday morning, projecting her sketch for her portrait of a transwoman poet at 936 Exchange Street (located to the right of Aubrey Roemer's wall). It can be tricky to design around windows, but the leading of the window on this wall lines up perfectly with the wing markings of a butterfly in the subject's hair.

Given the rain in the forecast, it's uncertain how much painting the muralists will accomplish on Monday. Barring weather issues, IAN KUALI'Iis set to begin painting at 40 Greenleaf Street, and ROC PAINT DIVISION(featuring Nzinga Muhammad, Etana Browne, and Kaori-Mei Stephens) will begin work at the Flying Squirrel, 285 Clarissa Street.

SEAN 9 LUGOwill arrive in Rochester Tuesday night and begin painting on Wednesday, July 26. Instead of one wall, Lugo will create a series of wheatpaste murals to form a story throughout the city. CITY will update you with locations as they are available. 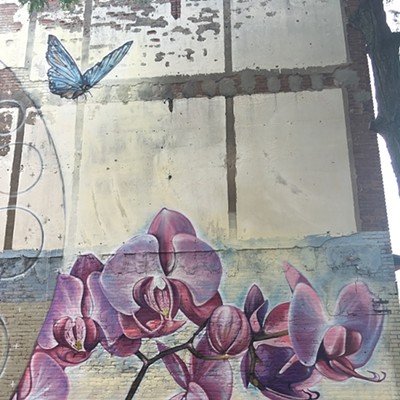 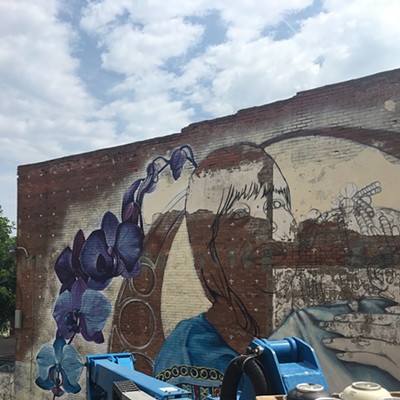 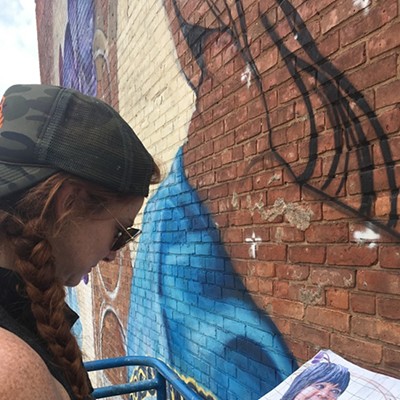 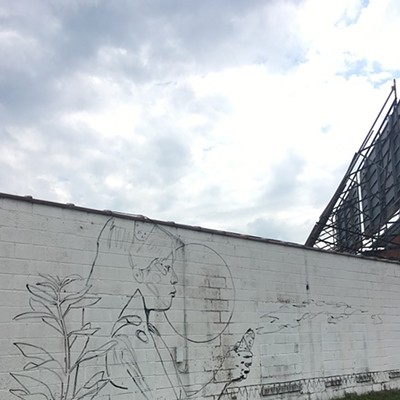 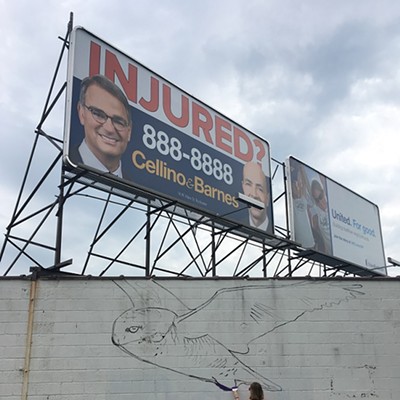 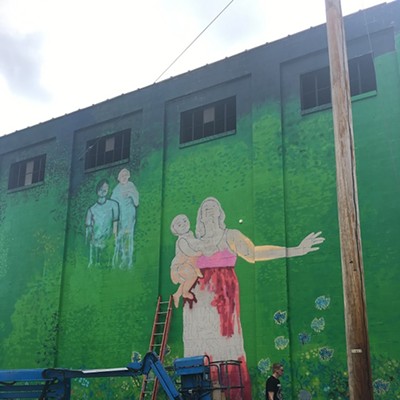