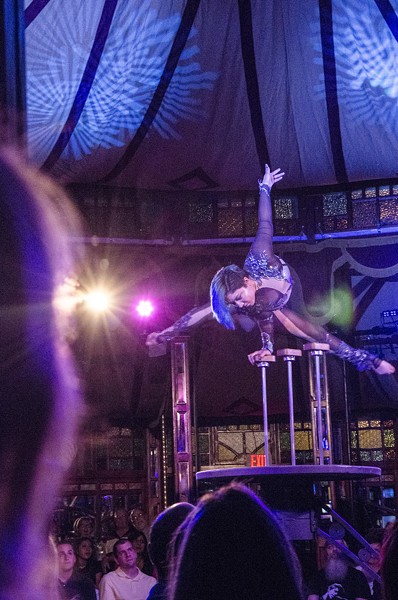 Attendance for the fourth annual First Niagara Rochester Fringe Festival (held September 17 through September 26) hit more than 63,000 people, a new high mark for the Fringe, organizers announced on Monday. And ticket sales were up more than 20 percent. The 2015 Fringe featured more than 500 performances and events; last year's Fringe included 380 shows, and drew out 60,000 attendees.

An estimated 13,000 people gathered in Martin Luther King Jr. Park at Manhattan Square for Friday on the Fringe, and to witness New York City's Grounded Aerial team dance across the side of the 21-story One HSBC Plaza, while Rochester troupe BIODANCE performed on the park's metal structure, A Tribute to Man. Last year's Friday on the Fringe performance by Circus Orange drew about 10,000 attendees.

The 10-day Fringe featured site-specific, participatory acts such as Berlin's world-renowned Rimini Protokoll, which created Remote Rochester, the second US "Remote" production -- the first was in New York City. The event sold out all but its first few performances.

Many of these performances took place on stages at new participating locations, including Lyric Theatre, The Strong National Museum of Play, Abilene, and the festival's largest venue: RAPA at School of the Arts, which hosted 80 shows.

"The board is just as excited as everyone else by the way this festival is maturing," said Board Chair Justin L. Vigdor. "As community support for Fringe continues to grow, we look forward to becoming even more inventive, inspiring and international."

The Fringe specified that attendance figures are based on modern crowd estimation techniques using a standardized formula (based on the work of Drs. Herbert Jacobs, Ray Watson and Paul Yip: area divided by crowd density) as well as by venue counts and ticket sales, and are deemed accurate within 10 percent, plus or minus.